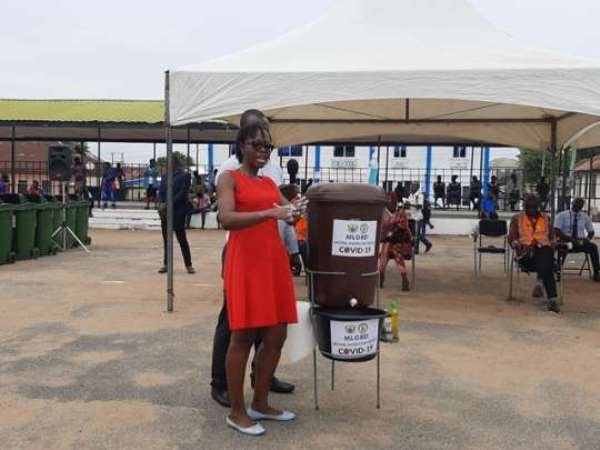 The Ministry of Local Government and Rural Development (MLGRD) has directed all Metropolitan, Municipal and District Assemblies (MMDAs) to provide poly tanks for all markets to provide uninterrupted water flow for hand washing to avoid spread of the deadly coronavirus.

Nana Adjei Boateng, the Deputy Minister of Local Government and Rural Development, gave the directive at a sensitisation durbar in Koforidua for market queens and leaders on government measures to contain the Covid-19.

In addition the MLGRD was providing 100 complete hand washing sets, 100 bundles of tissue paper, and 100 packs of soaps and sanitizers to all the MMDAs to be distributed to markets and public spaces.

Nana Boateng said the Ministry was considering rationing market days across the country to minimise congestion as a way of controlling the spread of the virus and appealed to the market leaders and queens to support the initiative.

Mr Eric Kwakye-Dafuor, the Eastern Regional Minister, who chaired the function, said congestion of markets in Ghana made it difficult to put stringent measures in place in times like these, however “government this time round would not leave anything to chance”.

Mrs Ursula Owusu-Ekuful, the Minister of Communications, who led the government delegation, said government alone could not succeed in containing the diseases and called on every Ghanaian to be responsible and support every measure.

“Don't think of your profits alone and ignore the directives on the markets,” she said, and appealed to traders to be compassionate and desist from the exorbitant increase in prices, especially hand sanitizers, which was a disincentive to people in adhering to the precautionary measures.

Mrs Bridget Anim, the Regional Health Promotion Officer, said all 12 suspected cases in the Region tested negative, however, three people were being quarantined and urged the public to keep their distance to curb the spread.

Teaching the women how to wash the hands and apply sanitizers, she said rubbing the hands and knuckles must be done vigorously and no matter the number of times the sanitizers were used, the hands must still be washed where there was running water and soap.

Dr Cardinal Newton, the Acting Medical Director of the Eastern Regional Hospital, said the Hospital had increased its hand sanitizer production ever since the disease broke in Ghana to ensure people and health facilities had access to good ones.

He said the facility had also created an isolation ward and had measures in place to contain the disease and urged the public not to panic but adhere to the precautionary measures.