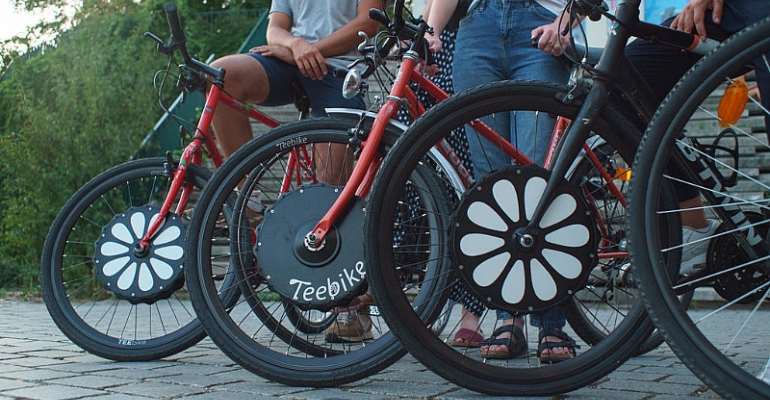 As electric bicycles become popular, a number of manufacturers in France are bringing innovations for improving their performance. The French startup Teebike has developed a universal front wheel that turns a bicycle into an electric bicycle.

The Nice-based company has managed to integrate a motor on the wheel which can easily fit onto the  existing front wheel mount of a conventional bike.

The wheel, controlled by a dedicated smartphone application, has three power modes. It also boasts a boost mode that turns it without pedaling.

“Users also have the possibility of locking the wheel through the Bluetooth connected app and activate an anti-theft alarm,” said Teebike co-founder Marine Billys.

The wheel provides a bicycle with an autonomy of between 60 and 80 km and can be charged in four hours. The company has created four different sizes of wheels that cover almost all the bicycle models.

“With this wheel, you can enjoy the advantages of an electric bike, at half the price,” Billys said.

Twin transmission for on-demand torque
The Annecy-based startup Whattfornow has developed a radical solution in the form of a separate belt-drive electric transmission in addition to the conventional manual pedal drive.

“We wanted to go back to real cycling and not an electric assistance bike,"  said Whattfornow boss Francois Guers. "You have the regular classical bicycle mode when you don't want to use the electricity but when you need electrical assistance, you can get big power.”

The power from the electric drive comes in the form of a punchy on-demand torque that enables the bicycle to reach its maximum speed of 25 km/hr in less than three seconds.

Once the bicycle hits a desired speed, the rider can resort to the classical pedaling mode. The power boost comes in three modes, with each subsequent mode delivering more torque.

“The electric transmission allows the user to transmit bigger torque to the rear wheel. Torque produces acceleration. Since electric bikes are limited to 25 km/hr, the objective is to reach the top speed as fast as possible. This acceleration is equivalent or sometimes bigger than a regular motorcycle,” Guers said.