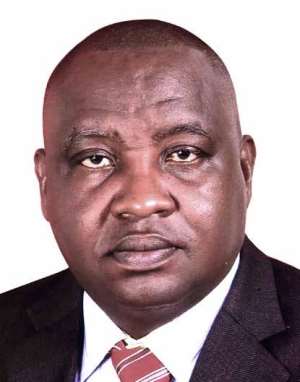 The Former Deputy Minister of Education in the erstwhile Mahama administration in charge of Pre Tertiary and a Former Member of Parliament for Techiman North Constituency, Hon Alex Kyeremeh has described the double track system by this government in the Senior High Schools as ''a lazy man approach''.

The Former Deputy Minister made this comment during his interactive one on one session on Masem TV Gh on Monday, 9th March 2020 at his resident in Techiman.

The double-track system has been introduced into the Senior High Schools by the Akufo-Addo government, a system that, according to others, bring economic hardships to parents who have no other option than to engage their wards into extra classes whenever their wards come home for at least three months break in order to complement their normal academic works.

This interview followed a release by the Former Minister that sort to expose the Vice President on his recent comments regarding the educational sector and lay bear the facts to the public.

Kindly find below the full release by the Former Deputy Minister for Education, Hon Alex Kyere.

I'm compelled to put together this piece to address few issues raised by His Excellency Dr Mamudu Bawumia the vice President of Ghana in the town hall meeting held yesterday in Kumasi. An erroneous impression was created and facts distorted in the education sector by Dr Bawumia in that engagement.

It is recalled that, the NPP government upon assuming office in 2017 hastily implemented the Free Senior High School (FSHS) program. Though there were serious concerns raised concerning the manner in which the policy were been implemented, non was given prominence by the government. Consequently, the double track system was introduced as a means to managing the problem of overcrowding in the secondary schools. This system in my opinion and probably the opinion of many Ghanaians was the worse thing to ever happen in Ghana's second cycle educational sector. The system provided limited contact hours for the students since they were divided into gold track and green track, sound like traffic light right! Yes that is what our secondary school system which hirthato was one of the best in West Africa has been reduced to.

The consolation and perhaps the best explanation they gave was that, the double track system was temporal and that it would soon make way for the single track. A temporal program ideally should not exceeded a year or two if we meant the true meaning of temporal.

Fast forward to yesterday at the Kumasi results fair, the Vice President Dr Mamudu Bawumia stated emphatically that, anyone who promise to abolish the double track system would eventually abolish the Free SHS program. I found that remark to be diabolical and a mark of dishonesty. How do a temporal program suddenly become the foundation of the Free Senior High School program which was promised in 2012 when the idea of double track system was not conceived? Isn't Dr Bawumia and his clueless government contradicting themselves in this whole Free SHS and double track brouhaha?

It is an established fact that, the double track system has worsen the plight of most parents since they are compelled under the circumstances to pay exorbitant fees for extra classes tuition for their wards. My checks have shown that, some parents pay as high as Ghc500 per month and in some cases more as extra classes fee, so where lies the much touted free senior high? Parents who cannot raise money to pay extra classes to keep their wards busy will pay the ultimate price of bearing teenage pregnancy and other social vices by their wards. I remember that, the headmistress of Notre Dame senior high school Ms Irene Brookeman disclosed to the parliamentary select committee on education that, 8 students got pregnant in her school for the 2018/2019 academic year alone. This is unacceptable!

Clearly, the government of Nana Addo and Dr Bawumia have shown enough signs that, anytime the Honest Man His Excellency John Dramani Mahama speaks, providing policy alternatives makes the NPP panic as though the devastating coronavirus had dropped in Ghana. John Mahama recently in a live facebook program stated among other things that, he would immediately abolish the double track system upon assumption of office. Undoubtedly his statement sent shivers down the spines of every member of this clueless government and so the resultant knee-jerk response from Bawumia.

The NPP government failed to confront the challenges bedevilled the sector but have often resorted to blaming His Excellency John Dramani Mahama for every misfortune that befalls them. For instance the Computer School Selection and Placement System(CSSPS) which was established and properly managed by successive governments has been completely messed up. For example, out of the numerous secondary schools in Ghana, students were placed in only 250 of the schools creating undue overcrowding. A little effort will provide you with overwhelming facts on these system failures which have contributed to overcrowding in the schools.

NDC government in 2010 faced a much bigger challenge when the 4 years secondary school duration was implemented. There were inadequate infrastructure to house the 179,998 first years students entering the schools when the 3rd years students had stayed back for their fourth year. But through prudent measures, we managed to raised up structures within a spade of 150 days to accommodate all the students. This shows that, it will be an easy hurdle to overcome in providing accommodation for just 100,000 students. His Excellency John Dramani Mahama was right to make that declaration for we have the track record on that.

To further buttress His Excellency John Dramani Mahama's assertion, let me draw your attention to the following facts: In the implementation of the progressively free senior high school program saw massive infrastructure projects sprung up in the various secondary schools. School fees were also standardised and student mattresses, textbooks etc were also provided to drastically reduce the cost of providing for a student. This resulted in an increase of 67% of the transitional rate from JHS to SHS(Ref.EMIS DATA 2016). With the implementation of the much touted free SHS, the transitional rate has increased marginally to 69%(REF. Bawumia Ghanaiantimes.com). This marginal increase could even be attributed to population increase and not necessarily the result of the Free SHS program. Similarly, student repition rate has risen to 12% whiles drop out rate increased astronomically to 15%, this surely is not any better outcomes to celebrate.

Let me at this point reitrate the position of His Excellency John Dramani Mahama that, we will abolish the double track system when we take power in 2021. Maybe my friends in NPP need be reminded that; our records in the are of educational infrastructure is unmatched;

Just a gist of our projects to refresh your memories.

▪the expansion works that we carried out in 275 secondary schools,

▪the 123 E-blocks funded by world bank
▪the world bank sponsored improved 50 existing schools etc would help help us a great deal to abolish the useless double track system. I'm aware that, as it stands now the excess $44 million world bank facility which was negotiated by the government of John Mahama is the only available money for educational infrastructure projects. It must be noted that, when this facility was secured, NPP then in opposition ridiculed the government claiming we borrowed to buy pads. Today the supposed pad loan is what the NPP government is shamefully using to fund educational infrastructure projects.

In summary, the next NDC government under the able leadership of His Excellency John Dramani Mahama, double track system will be a thing of the past. All the abandoned uncompleted E-blocks will be vigorously worked on to provide adequate and excess accommodation for students.