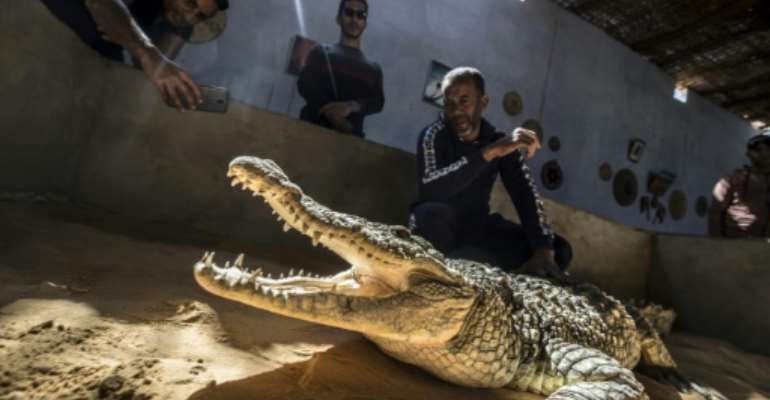 Mamdouh Hassan (R) shows a crocodile to visitors at his crocodile terrarium in the Nubian village of Gharb Soheil, on the west bank of the Nile river in southern Egypt. By Khaled DESOUKI (AFP)

Deep in the Nubia, a region along the Nile in southern Egypt, a baby crocodile sits on Mamdouh Hassan's shoulder to wow tourists.

The reptiles are a source of income for Egypt's Nubian minority, with visitors paying to marvel at the tamed creatures.

But beyond bringing in tourist dollars, crocodiles play an important role in the culture of the ethnic group with a history dating to Pharaonic times and its own unique language.

The Nubians traditionally lived along the banks of the Nile in southern Egypt with roots extending into northern Sudan.

In Gharb Soheil, a Nubian village near Aswan, mummified crocodile heads still adorn the doors of the traditional blue and white domed homes.

A mummified crocodile hangs at a house in the Nubian village of Gharb Soheil. By Khaled DESOUKI (AFP)

In Gharb Soheil a stuffed crocodile on the door shows that the homeowner keeps the large reptiles as pets.

Outside his humble home in the village, Hassan gently rubbed the back of Francesca -- a 1.5-metre (five-foot)-long, 15-year-old crocodile.

"I have raised her since she was born," the 45-year-old said lovingly of his pride and joy.

"She lives on fish, meat and chicken."

Mamdouh Hassan holds a taxidermied crocodile at his home in Gharb Soheil. By Khaled DESOUKI (AFP)

During the reign of president Gamal Abdel Nasser, the construction of the Aswan High Dam created a reservoir over traditional Nubian lands.

When Lake Nasser began filling in 1964, 44 Nubian villages were flooded.

While the Nile's crocodiles benefited from the new habitat, Nasser never fulfilled his promise to adequately compensate Nubians with new land.

Instead, about 50,000 Nubians were displaced to villages north of the dam, on the west bank of the Nile near Kom Ombo and Aswan -- a narrow strip of land with limited space for agriculture.

Ever since, Nubians have demanded the return of their lands and have maintained their culture by modernising their traditions. Keeping crocodiles became a way to supplement incomes and promote their heritage.

Mamdouh Hassan's father taught him how to raise and tame baby crocodiles. By Khaled DESOUKI (AFP)

Hassan learnt to domesticate crocodiles from his father.

"My father was one of the first people in the Nubian village who really pioneered the idea of bringing in crocodiles as pets to lure tourists," he told AFP.

In the 20 years since, he has developed a keen sense for where and when wild crocodile eggs will hatch.

Female crocodiles lay their eggs along the banks of Lake Nasser where Hassan watches for the baby reptiles to emerge before carrying them home.

"The crocodile's aggressive nature is tempered by growing up in the home with us and being cared for," he said.

Francesca is the star of the show in the village, Hassan says. She was named by Italian tourists who enjoyed her sunny personality, so Hassan kept the name.

Visitors snap selfies with the lounging beasts, while the villagers regale the tourists with Nubian folk tales about the crocodiles.

Hany, a tourist from Cairo, was delighted with the spectacle of Hassan opening the crocodiles' mouths wide with his bare hands.

"I came here with my family to spend school holidays, for the kids to enjoy seeing the crocs," the 35-year-old said.

'Angels of the Nile'

Mamdouh Hassan has developed a keen sense for when baby crocodiles will hatch from their eggs in nests buried on the banks of Lake Nasser. By Khaled DESOUKI (AFP)

For ancient Pharaohs, the crocodile-headed god Sobek embodied the fluid nature of the Nile and was prayed to for protection from the annual floods.

A temple is dedicated to Sobek in Kom Ombo, engraved with pictograms and hieroglyphics detailing the embalming of crocodiles.

To this day, Nubians maintain a tradition of crocodile taxidermy, one that remains true to a centuries-old technique.

"Although we know very well the value of crocodile leather, we do not sell it... we cherish it," Hassan explained.

A dead crocodile is skinned from its gut and filled with straw or sawdust. Large crocodiles take about a month to mummify while a smaller one dries in a few days, Hassan said.

"This is Franco, who died last month," he said of the large mummified head of one of his former pets.

Abdel-Hakim Abdou, a curly-haired, 37-year-old cafe owner who recommends Hassan's terrarium as a must-see tourist attraction, rhapsodised about the importance of crocodiles to Nubians.

"The Nile for the Nubian represents life... everything that roams in it we consider angels," he said.