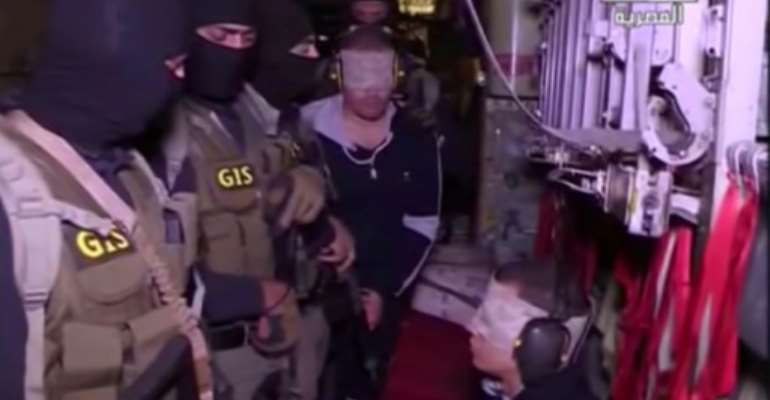 An image from May 29, 2019 shows Hisham Ashmawy (C) aboard a military aircraft after being handed over by forces loyal to Libyan strongman Khalifa Haftar. By - (AFP/File)

"The execution by hanging was carried out based on a decision by the military court ... and after taking all the relevant judicial procedures," said army spokesman Tamer al-Rifai.

Ashmawy -- dubbed Egypt's "most wanted man" by local media -- was a former officer with Egypt's special forces who went on to fight with Al-Qaeda linked groups.

On Monday, a Cairo court sentenced Ashmawy to death along with 36 others over 54 crimes including killing police officers and blowing up several security installations.

Born in 1978 or 1979, Ashwamy joined the Egyptian Armed Forces as a young man and rose to join the elite unit, but was dismissed in 2012 over his hardening religious views.

Ashmawy was convicted last November by a military court over his role in 14 crimes including the 2014 killing of 22 soldiers in a border post attack, and a 2013 assassination attempt on a former interior minister, who survived the attack.

He was also found guilty of having led the Ansar Beit al-Maqdis Islamist militant group in the turbulent Sinai region.

Ashmawy broke with the organisation after it pledged allegiance to the Islamic State group in November 2014.

Other charges against him included infiltrating to Libyan territories and forming an Al-Qaeda aligned militant group, al-Mourabitoun, there.

In October 2018, the self-styled Libyan National Army under strongman Khalifa Haftar captured Ashmawy in the eastern city of Derna. He was extradited to Egypt in May.

Egypt has for years been fighting a hardened insurgency in North Sinai that escalated after the army's 2013 ouster of Islamist president Mohamed Morsi.

In February 2018, the army and police launched a nationwide operation against militants focused on North Sinai that is ongoing.