...As He Calls For Calm Among Supporters 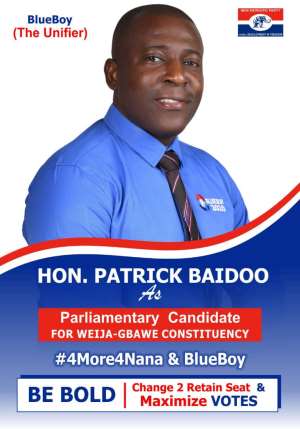 One of the key contenders of the NPP Weija-Gbawe Constituency Parliamentary Primaries, Hon. Patrick Kwabena Ampong Baidoo popularly known as 'Blue Boy', has been disqualified at vetting.

Hon. Blue Boy who is seeking to unseat the incumbent MP Tina Gifty Naa Ayeley Mensah, was disqualified on Monday during the vetting at the NPP Greater Accra Regional Office at Dzorwulu.

The reason cited for his disqualification was that he "allegedly told Regional Secretary that he is in charge during the confirmation of MCE for Weija-Gbawe."

He, has, however, in a statement called for cool heads among his supporters as he prepares to petition NPP national leadership.

This comes after several machinations to frustrate his efforts to contest the sitting MP in the April 25th Primaries.

On March 2, 2020, Hon. Patrick Baidoo (aka BlueBoy), a former Presiding Member (PM) of the Ga South and Weija – Gbawe Municipal Assemblies respectively who had filed his nomination to contest the Weija – Gbawe Constituency Parliamentary Primaries did avail himself for vetting.

Issues emanating from the vetting:

In this vein, he is calling on all his teeming supporters and sympathizers to remain calm and resolute for The Battle Is Still the Lords.