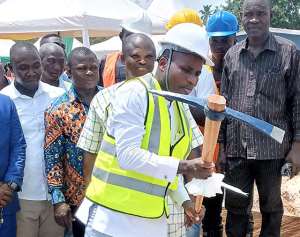 The District Chief Executive (DCE) for Ellembelle in the Western Region, Kwasi Bonzoh, has said he has no doubt the ruling New Patriotic Party (NPP) will retain power in this year's general election.

According to him, the Akufo-Addo government has kept faith with the people of Ghana by delivering on its mandate.

“We the Nzemas, in the Ellembelle District, have realized that the President has justified the confidence reposed in him by giving us our share of the national cake,” he pointed out.

Addressing journalists during an inspection tour of many projects in the district, the DCE, who is also the 2020 parliamentary candidate of the NPP in Ellembelle, said the President was fulfilling all the promises he made to the people of the area in 2016 and they had appreciated the government's effort to develop the area.

Currently, there is the construction of a 26.5-km Esiama-Nkroful-Teleku-Bokazo-Anyinase road which was in a very deplorable state.

The bad state of the Nkroful road, according to the residents, was unacceptable and disrespectful to the first President of Ghana, Osagyefo Dr. Kwame Nkrumah, who hailed from the place.

He revealed that the project was divided into two phases and that the first phase, which is the 6.5-km Esiama-Anwiah road, was being funded by GNPC through Ghana Gas Company.

He said the first phase which would have 'asphaltic concrete' would be completed by July.

The DCE said the second phase which is a 20-km road from Anwiah to Asasetre to Menzexo is state funded under Critical Projects component of the Consolidated Fund.

“The road will have three major bridges and an axle load checkpoint to be administered by the Ghana Highway Authority,” he added.

He said the second phase of the road would be completed by October and would cost the government about GH¢125 million.

The DCE said the government had constructed a 12-unit classroom block for the Nkroful Agricultural Senior High School to absorb double-track system students.

Early on, Mr. Bonzoh cut the sod for the construction of a number of facilities for the Charlotte Dolphine Vocational Institute at Sanzule to give the institute a facelift.

The facilities included a new administration block, two dormitories, workshop and additional classroom blocks, to be completed in December under the Ministry of Education and the National Vocational Training Institute (NVTI) projects.

He said when completed, the school would increase the student population from the current 600 to about 1,500.

Besides, the DCE cut the sod for the construction of a 400 sitting capacity dining hall for the Esiama Secondary Technical School in the district.

The facility will have two kitchens, a matron's office and washrooms to be completed within eight months.