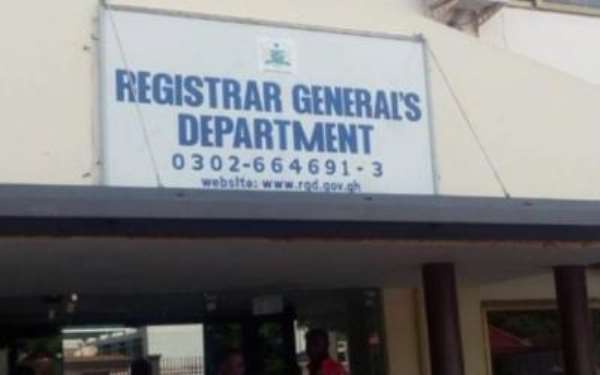 The Registrar-General's Department (RGD) has announced its decision to expunge the names of dormant companies from the Register of Companies.

The Registrar-General of the RGD, Mrs Jemima Oware, who announced this when she paid a courtesy call on the Editor of the Daily Graphic, Mr Kobby Asmah, in his office in Accra yesterday, said out of the 740,628 companies registered between 1963 and 2011, only 70,345, representing 9.5%, had regularised their operations with the department.

Consequently, she said, the department had outlined a process for striking off the names of those dormant companies to enable it to have an accurate, reliable, accessible, credible and verifiable database.

She, however, said the striking off would be done after exhaustive steps to get owners of such companies to update their documents through re-registration and filing of their annual and financial returns.

The steps include three public notifications to all affected entities to file their returns, barring which their names would be struck off, she added.

Names cancelled from the register can only return after 12 years.

Companies Act
Under Section 289 of The Companies Act, 2019 (Act 992), a company’s name can be struck off due to its failure to file its annual returns on time or due to a change in the company’s registered office and principal place of business without notifying the Registrar of Companies.

The act mandates every company to file its annual and financial returns 18 months after incorporation.

Visit
Mrs Oware, who was accompanied by a Principal State Attorney, Ms Domtie Sarpong, and the Head of Public Affairs of the RGD, Ms Constance Adomaa Takyi, said the department was set to begin the process by publishing the names of companies and businesses in that category next month.

Process of striking off names
“Within two months of the publication asking their owners to tell me whether they are still in existence, if any of them is in existence, then they should quickly come and file their annual returns and update me with their financial statement.

She said after the three months, which would be the last notification, the department would strike off the names of those companies in its register, saying that “what that means is that I will dissolve your company and you cannot do business in Ghana”.

She explained further that when the name of a company was struck off the register, it could only come back into.