Ghana Can Be A Leader In Finding The Cure For Corruption— Prof. Christopher Yenkey 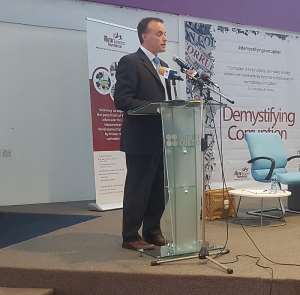 Professor of Social Psychology at the Darla Moore School of Business, University of Carolina, Prof. Christopher Yenkey has indicated that there is a need for corruption to be confronted.

Prof. Christopher Yenkey, who described corruption as a social disease that needs a vaccine said, Ghana can be a leader in finding the cure for corruption “vaccine “if the citizenry and government officials make a concerted effort to disclaim receipt and payment of bribes.

Prof. Yenkey said this at a public lecture organized by the Ghana Anti Corruption Coalition(GACC) in collaboration with Youth Bridge Foundation(YBF) in Accra on the theme: “Youth and Corruption: Demystifying corruption”.

Below is a presentation made by prof. Christopher Yenkey:

Corruption is not a simple, one-sided activity: victims can inadvertently become collaborators in normalizing corruption. Our goal is to establish a stronger understanding among Ghanaian youth, AntiCorruption Campaigners and Government that corruption is facilitated by a system of buyers and sellers rather than simply by deviant officials. This understanding creates an opportunity for youth and society at large to play a more active role in its elimination. This message will be achieved through an initial public lecture where Prof. Yenkey presents a range of lessons from cutting edge corruption research in a way that is accessible to anti-corruption campaigners and a non-academic, especially youth, audience.

1. Do social relations and tight-knit social groups help or hurt the fight against corruption?

2. Is corruption a moral or a strategic issue?

3. What can we do to disrupt the normalization of corruption?

Question 1: Do social relations and tight-knit social groups help or hurt the fight against corruption?

It is a well-established principle that close social groups police their own. That is, cohesive social groups- think of a family or an ethnic group- have informal but clear-cut norms of acceptable behavior. To return to the definitions of misconduct and deviance I gave just a minute ago, close-knit social groups often have clear boundaries about what constitutes “improper behavior” that “deviates from accepted standards.”

I don’t dispute this, but I do think we overlook two common and powerful scenarios that arise from this: cohesive groups are SO good at establishing positive norms that members of the group STOP paying attention to and just assume everyone is behaving properly. Then, when we believe that the group is so “good,” we become VERY committed to the group’s identity that they are less likely to prosecute deviance when they see it because it means they are going against this group that we’re so committed to.

Research in criminology clearly documents the dark side to close-knit social groups and strong communities. Researchers find that there is LESS reporting of victimization in socially homogeneous locations. Why? It’s an easy explanation: we don’t like to rock the boat. We don’t want to call attention to problems that are too close to home.

Social psychology gives us all kinds of reasons why we don’t blow the whistle on members of our close community. Because we have so much at stake with our group or community’s reputation or identity, we hurt ourselves when we make it publicly known that a member of our community is deviant. When we report problems within a strong community that everyone believes to be a positive force, it makes us all look bad. It EXPOSES that we are NOT capable of enforcing positive norms in our community.

It suggests that this positive story/positive reputation was a lie. Our damaged integrity and identity means that people from our group might not get access to resources we want ….all of this adds up to the prediction that we tend to go along with deviant behavior within close-knit groups.

Small, close groups have their own INTERESTS. The group can come to value itself OVER ITS INDIVIDUAL MEMBERS, which puts individuals at risk of victimization.

In these close-knit groups, what we tend to lose is the incentive to be objective, to hold others accountable, to do DUE DILIGENCE. Everyone is familiar with this term?

This is where the rubber meets the road, so to speak. Those investors in Kenya who chose a brokerage owned and operated by a member of their ethnic group- they ASSUMED that the shared group membership would protect them….so they stopped paying attention! Do you blindly trust or put faith in some other person to do the right thing, or do you monitor and keep track of them to make SURE they do the right thing?

Everyone here is familiar with due diligence’s first cousin and best friend, transparency. Both of them have at their core the discovery of fundamental information necessary for informed decision making and to protect ourselves against victimization.

So now the question is how do we get it? How do we get access to the core information needed and consider it objectively?

So, what do we do? Well, at the risk of being simplistic, let’s think about striking a balance. A balance b/w too much isolation and too much cohesion. I call it a “productive level of social friction.” What I mean by this is that there should be some amount of differences between people or groups of people that stimulate them to question each other in a productive way.

QUESTION 2: Is corruption a moral or strategic issue?

Answer: it depends on who we’re talking about. When we think about corruption, and now I’m talking more about bribery and the like, we tend to view it as immoral when other people do it, and we tend to see it as strategic when we do it ourselves.

Is it immoral for the police to solicit bribes? Most of us would say yes.

Is it immoral for us to pay a bribe to the police? Most of us would say no. Instead, most of us would point to some version of a cost/benefit analysis: we know that the officer will demand it, so I might as well get it over with; the officer could take me to jail, so it makes sense to pay to avoid that harm even though it would be unjustified; I’m late and need to get going….etc.

The officer is immoral for soliciting, but we are strategic for paying.

This example highlights a VERY common way that human beings make sense of negative events: social psychologists have labeled this the FUNDAMENTAL ATTRIBUTION ERROR. The definition of it is this: we emphasize personality-based explanations for others’ behaviors while we emphasize situational explanations for our own behavior. That is, we blame other people personally for their things that go wrong, but we blame the circumstances around us for our things that go wrong.

Common examples: When we see someone else trip on the sidewalk, we tend to think they are clumsy; if we trip on the sidewalk, we tend to blame to the cracks in the pavement. If someone cuts us off in traffic, they must be a selfish jerk. If we cut someone else off, we have a perfectly good reason for doing so: I’m late to pick up my kid, I’m late to work, etc.

Applied to paying bribes and being involved in corrupt transactions, this manifests as seeing others’ behaviours as immoral but our own behavior as strategic.

This tendency to explain others behavior as immoral but our own behavior as strategic creates a situation where corruption will ALWAYS persist, b/c of the higher probability that the people involved in the transaction will see it as strategic and most of the time it’s in our strategic interest to engage in the corrupt transaction.

Now we’re at the point where we have to talk about the MARKET FOR BRIBES. For all bribes, someone pays and someone else gets paid. That is just another way to say that there is a buyer and a seller. And if we know ANYTHING from hundreds of years of economic development in every corner of the globe, it’s this: where there’s a willing buyer, there will ALWAYS be a willing seller. Sometimes supply creates demand, but demand ALWAYS creates supply. ALWAYS: Guns. Drugs. Pornography. Prostitution. Money Laundering. Toxic waste. You name it.

And these kinds of things make paying off the police at a traffic stop seem like not that big of a deal.

I strongly disagree with seeing corruption as one-sided. There is NO SUCH THING as one-sided corruption. There are always two sides to the transaction.

One common response we have for this is that we like to pass laws, and these laws prescribe punishments for people who break the law. It’s the most common deterrence mechanism: install punishments that make it too costly to break the law. U.S. and UK courts have confirmed that Airbus paid bribes, and even now, I understand the Office of the Special Prosecutor is now investigating supposed collaborators here in Ghana. We applaud these formal developments and we want them to signal to future actors the inherent costs of engaging in this kind of activity.

67% of Ghanaians report fears of retribution if the report corruption (Afrobarometer 2019), and we have sympathy for them. Why? Conceptually, they are in exactly the same position as our corrupt officials that sell contracts to Airbus. Instead of benefiting from the Airbus bribe, we benefit from avoiding retribution.

To summarize answers to question 2….we have a couple of very serious problems. We tend to hold others to a different standard than we hold ourselves, and closely related to that that is a reasonable concern that when there is a willing buyer or payer of a bribe, the incentive for a willing individual seller to arise is as understandable as it is collectively damaging. THERE IS A DIFFERENCE BETWEEN OUR BELIEFS AND OUR BEHAVIORS. And seeing that this is the case, it becomes much easier to see how CORRUPTION BECOMES NORMAL. Our third and final question addresses how we can put a stop to that.

QUESTION 3: How can we disrupt the normalization of corruption?

We saw a lot of the process of how corruption can become normalized in the last topic. Surely in the year 2020, there isn’t really any dispute about whether or not corruption is common, is there? You can dislike that it’s so prevalent, but that doesn’t change the empirical reality.

Data from Transparency International show that the corruption levels in all countries do not change much over time.

According to Ashforth and Anand (2003), corruption becomes normalized as a result of

Institutionalization: the process by which corrupt decisions become embedded in organizations and their processes (a lot of that from topic 2) Corruption takes a regular place in the administrative system, it becomes a normal part of how decisions are made.

Rationalization: the process through which new ideologies develop to justify and sometimes even valorize corrupt decisions (again a lot from topic 2). We find a way to tell ourselves that these corrupt decisions are ok. They are a strategic decision, it’s not our fault, we can’t do anything about them.

Socialization: the process through which newcomers come to accept a deviant process as normal

Look at Afrobarometer: Ghanians 18-25 years-old have significantly lower perceptions of corruption, 1523% lower than other age groups.

This social vaccine will come from the bottom up. Ghana can be a leader in finding the cure, and it is a pleasure to work with the Youth Bridge Foundation and the Ghana Anti-corruption Coalition towards that.