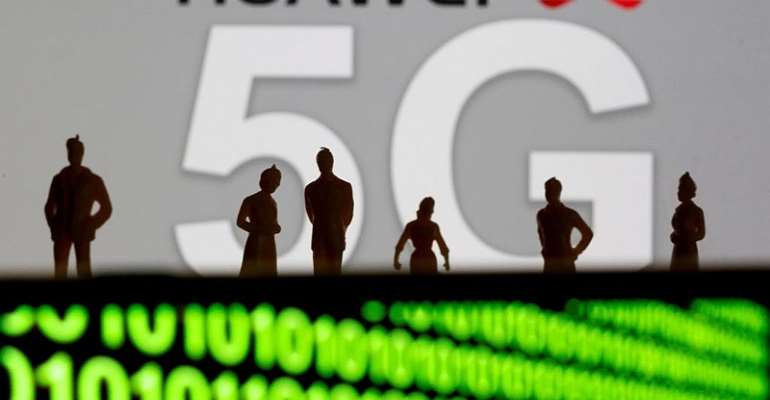 As France prepares to roll out a 5G mobile data network before the end of 2020, questions remain on how secure the network will be and how Paris will navigate the Huawei conundrum, as the Chinese hardware supplier is perceived to be high risk.

5G technology is expected to generate up to 3.6 trillion dollars in economic output worldwide and support over 22 million jobs by 2035, according to IHS Markit, a data and analytics provider for financial markets.

France's share in this new digital El Dorado is projected to reach 85 billion dollars in economic output and 400,000 jobs by 2035.

A very good reason, says the French government, to push forward with 5G this year.

“Many countries are moving fast and France needs to play a front-running role in this global competition”, declared Eric Bothorel, a member of parliament for the ruling La République en Marche party.

Bothorel co-authored a report on mobile and digital coverage in France published in January of this year.

“We will not depend on standards set by others and, therefore, we will protect our digital sovereignty”, he added.

Some governments share highly sensitive intelligence data, however the question is whether 5G will be a rigorously secured network with no risk of intrusion.

5G's new risks
According to Eric Bothorel, who also drafted France's August 2019 law on cybersecurity of mobile networks, the legal framework was designed to face the new challenges 5G presents.

Telecoms operators now have to obtain formal permission from the French Prime Minister in order to operate 5G technology.

“With 5G, you will have some new risks and the old way to manage the network is not a good way. That's the reason why we changed the law last summer and adopted a new one,” Bothorel said.

Under the new legislation, the prime minister will determine the degree of risk presented by the deployment of a particular 5G network, before granting clearance based on defense and national security parameters.

But Huawei, the Chinese tech giant, insists that its equipment is totally safe and has never presented any security risk, nor “backdoor” lapses.

James Sullivan, the head of cyber research at RUSI, the Royal United Services Institute in London, says that risks to 5G networks can be protected through new and inventive ways.

“People talk about 5G being revolutionary, but I don't think that's true at this moment. It's more evolutionary. 5G builds on top of 4G,” he says.

Sullivan believes that the measures used to secure 4G networks can still apply, in many instances, to 5G networks.

“It's just about doing them well, and in a different way,” he added

“I just don't think it really stands up when suddenly we draw a line in the sand and say, everything you've been doing before no longer applies.

“And it's now suddenly the Wild West and you're in the 5G network and you do what you want. I just don't think that stands up."

Huawei, Ericsson or Nokia?
The four mobile operators in France – SFR, Orange, Bouygues Telecom and Free – have a choice between Finland's Nokia, Sweden's Ericsson and China's Huawei, who are currently the world's three 5G hardware engineers.

Huawei is perceived to be a high risk operator because of China's 2017 National Intelligence and Cybersecurity Laws, which require companies to share data with the Chinese government should they be requested to do so.

Robert O'Brien, the United States National Security Adviser, said that the US has evidence that Huawei could “access sensitive and personal information” in the systems it maintains around the world.

"They are just going to steal wholesale state secrets," he said.

Bothorel told RFI that China is not the only country in the world to have enacted laws to obtain data. The United States has a similar mechanism with its 2018 CLOUD (Clarifying Lawful Overseas Use of Data) Act, whereby US law enforcement agencies, like the FBI, can compel US tech companies to provide data stored outside its territory.

In France, Huawei already occupies around 20% of the telecommunications market, the rest is divided between Nokia and Ericsson.

Orange has already said it will use 5G equipment from both Nokia and Ericsson. Free says it will go with Nokia.

SFR and Bouygues Telecom, which already use Huawei for their 4G network, have yet to announce which equipment supplier they will partner with. They are still waiting for a response from ANSSI, the national cybersecurity agency of France, which is reviewing their applications.

On 9 February, China issued a statement via its embassy in Paris, warning France about “discrimination and protectionism against Huawei” which, it said, could compromise European investment on the Chinese market.

Airbus, the European aerospace multinational, and China's industrial have done deals to the tune 900 million dollars in 2018.

Meanwhile, the United States – engaged in a trade war with China – is pressuring countries worldwide to ban Huawei. On 16 January, US President Donald Trump threatened to cut off intelligence sharing with countries dealing with the Chinese telecommunications giant.

Britain chose to use Huawei, along with Nokia and Ericsson, but excluded the Chinese supplier's equipment components from the most sensitive parts of its 5G network.

France and Huawei
Eric Bothorel says that France's decisions about its cybersecurity are not influenced by geopolitics.

“The security is not a question of nationality for provider of system. We ask every company who want to be part of the infrastructure in France to be checked and authorised by the ANSSI, the ” he said.

“It is not because you are Ericsson that the whole of your catalogue will be authorised. This is pure security approach.

“I'm totally aware that the US say to the rest of Europe don't buy any Huawei but this is not the solution.”

For James Sullivan the 5G debate is not just about cyber security but “has become part of a wider geopolitical conversation.”

He argues that none of the 5G vendors are “100% trustworthy”.

“You have to build controls assuming that all vendors have vulnerabilities in their equipment.

“As long as your network architecture is resilient, you have good access management controls, you conduct lots of testing and monitoring, and you have strong cyber standards, then it is possible to manage the risk from vendors who you deem to be high risk,” he said.

It offers superfast mobile connection, low latency (delays) and enables a greater number of devices to be connected to each other at the same time without saturating the network.

2020: 5G rollout in France
The government wants 5G rollout in, at least, eight cities by the end of 2020. Two or more for each of the four mobile operators.

But first, SFR, Bouygues Telecom, Free and Orange have to apply for the licences to use frequencies in the 3.4 to 3.8 GHz band, in France.

They have until 25 February to submit their application to ARCEP, the independent organisation which regulates telecommunications in France.

Then ARCEP will begin issuing licences during the first half of 2020.

The next step consists in purchasing 310 MHz of frequencies covering France, at both a fixed rate and through an auction. Each of the four mobile operators can buy 50 MHz of spectrum at a fixed price of 350 million euros for 15 years.

Then, the remaining 11 blocks of 10 MHz will be auctioned off by ARCEP in April, at a reserve price of 70 million euros. But no single operator can acquire more than 100 MHz blocks of spectrum.

The French government expects to raise, over 2 billion euros through the sales of the 5G spectrum.

No risk, no gain
For Sébastien Nadot, an independent member of Parliament, France cannot just  watch other nations push forward with 5G because the economic stakes are too high and “it's a race France cannot afford to lose”.

Sullivan adds that there is no such thing as zero risk.

“We've kind of reduced the concept of risk tolerance to a kind of zero sum debate of you're either completely safe or not safe at all. And that is just not true in cyber security.

If people are looking for 100% security, and I would say go offline.”