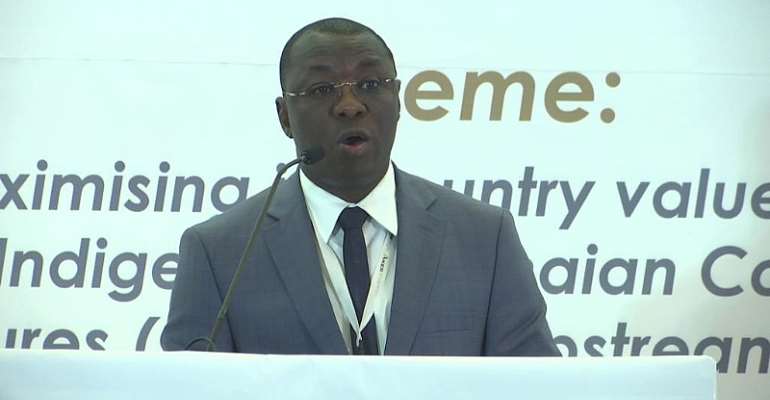 Government has defended the renegotiation of the AGM Ghana Ltd petroleum agreement that led to the reduction of the Ghana National Petroleum Commission (GNPC) participating interest in the bloc from 15 percent to 3 percent.

In the same renegotiation, GNPC’s interest dropped from 24 percent to zero.

Concerns had also been raised that the renegotiated agreement reduced Ghana's interests from 43 percent to 18 percent.

At a press briefing responding to claims from the National Democratic Congress , the government said this was to incentivise the new company, Aker Energy, that had taken over AGM to carry out its minimum obligations.

“The AGM petroleum agreement was signed under the NDC government. However, the company could not meet its minimum obligations. Following the acquisition of the company, the new owner resented a request to government for renegotiation to provide some incentives to support the prospects presented by the bloc,” Deputy Minister of Energy, Mohammed Amin Adams, explained.

He also held that the National Democratic Congress was being “economical with the truth” because Ghana’s free interest was renegotiated from 10 percent to 15 percent.

“Not only this. We successfully negotiated local participation from 2.5 percent to 5 percent,” he added.

Mr. Adams noted that the incentives were not novel and that the “renegotiation is allowed under the law and also under the petroleum agreement itself.”

Aker Energy eventually drilled three wells instead of the two outlined in the agreement and eventually struck oil after exploration in the deepwater Cape Three Points bloc.

“What this simply means is that the objectives of these incentives have been achieved and Ghana is better off,” the Deputy Minister said.

“Given its many commitments and the need to prevent it from being overexposed, GNPC decided to divest part of its bidding interest.”

The government also rubbished claims by the National Democratic Congress that there Quad Energy, the company consortium partnering AGM Ghana Ltd in its oil and gas exploration, was created under questionable circumstances.

The opposition party questioned why a company only incorporated in 2019 was purportedly granted a 5 percent stake in the deal.

Mr. Adams retorted that: “The qualification to be an indigenous company is that the company must be incorporated in Ghana… nobody says register the company 10 years before you can participate in whatever activity. There is no such provision.”

Previous concerns with the deal

IMANI Africa claimed that the country could be shortchanged by some $30 billion if the contractual agreements are not reviewed.

The GNPC is currently facing a lawsuit for handing over a 10 percent stake the country had to Aker Energy.

In 2015, Explorco Ghana Limited, a subsidiary company of GNPC, acquired 10 percent interest in the DWC/CTP oil bloc at a time when HESS Corporation, the then operator of the DWT/CTP oil bloc, was offloading part of its stake in the bloc.