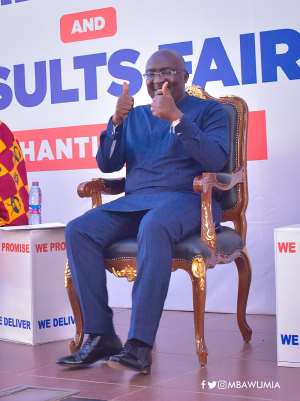 With respect, it appears that Vice President Mahammadu Bawumia, Hon. Yaw Osafo Marfo and Hon. Ken Ofi-Atta, still don't get the fact that humankind is going through cataclysmic change, which requires new economic thinking - one recognising the overarching importance of leveraging natural capital to underpin a new transition green economy.

In the era of global climate change, that is the most effective way to ensure that we can continue to maintain a relatively good quality of life, and enjoy high living standards, from green growth. A micro-level example of such a transition green business, is Kofi Boakye-Yiadom's Legon Botanical Gardens.

It will be the kind of transition green economic growth, which will ensure that as an aspirational people, we enjoy sustained-prosperity, amongst the key features of which, will include, lots of fresh air and clean water from streams, rivers and groundwater sources, from ecosystem services flowing to society from protected forests, which anchor ecotourism - as a new green economic pillar creating jobs galore, and a new cohort of brilliant green entrepreneurs, in the Kofi Boakye-Yiadom mould.

Alas, that super-clever-troika, have now become an embarrassment, and a laughing stock, of the world - for agreeing to allow canny Chinese bankers to run rings around them: and getting them to accept a massive loan, contingent upon their accepting the destruction of a Globally Significant Biodiversity Area - which the Atewa Forest Reserve represents.