Pompeo makes first trip to Africa with conflicting US signals 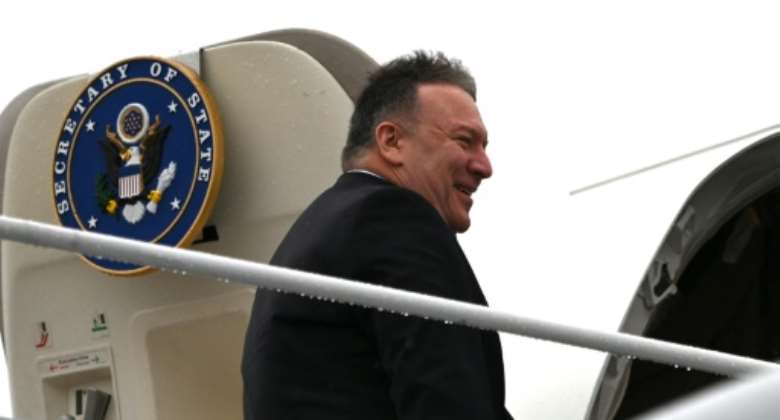 US Secretary of State Mike Pompeo boards his plane at Andrews Air Force Base en route to Munich on a trip that will include his first tour of sub-Saharan Africa. By Andrew CABALLERO-REYNOLDS (POOL/AFP)

The United States is discussing military cuts in Africa, has tightened visa rules for Africans and President Donald Trump notoriously was quoted as disparaging the continent with a vulgar epithet.

But in his first visit to sub-Saharan Africa in his nearly two years in office, Secretary of State Mike Pompeo will seek to lay out a positive vision for US cooperation with the continent where China has been increasingly active.

Pompeo on Saturday begins a trip to Senegal, Angola and Ethiopia, chosen for their leaders' attachment to democratic values in a continent that has seen backsliding in recent years.

"These three countries are major contributors to regional stability. Also, the countries are benefiting from dynamic leadership," a senior State Department official said on customary condition of anonymity.

The official said that a "major theme" will be the growing role of China, which has poured money into the continent as part of its global blitz of infrastructure spending.

China has invested especially heavily in Angola, which racked up an estimated $25 billion in debt to Beijing to be repaid with oil shipments.

Ethiopian Prime Minister Abiy Ahmed, who won the Nobel Peace Prize for his democratic reforms and reconciliation with Eritrea, speaks on a visit to South Africa in January 2020. By Phill Magakoe (AFP/File)

The United States has been encouraging developing countries to exercise caution with China, saying that big-ticket projects can turn into debt traps that primarily benefit China, and has billed the US private sector as an alternative.

The US official said Pompeo would stress "economic growth, trade and investment" in a continent whose population is forecast to double by 2050.

"We want to absolutely empower that youth and make sure that they are a force for dynamic growth and economic empowerment and better governance in the world," he said.

The United States has hardly sent consistently supportive messages ahead of Pompeo's trip. The Pentagon announced this week that it will start adjusting its military presence in Africa as it considers cuts, with resources instead expected to go to countering China, Russia and Iran.

Soldiers from the French Army in the Sahel monitor a rural area in northern Burkina Faso in November 2019. By MICHELE CATTANI (AFP/File)

France has voiced particular concern at the impact of US cuts on the fight against Islamist extremism. The French are leading a 4,500-strong operation in the Sahel to crush a rise in militants, with the United States providing in-flight refueling and other logistical support.

"I think the signal the US government is said to have sent that they are withdrawing from the Sahel will be very, very worrisome in Senegal and in the Sahelian countries," said Ahmadou Aly Mbaye, a professor at Cheikh Anta Diop University in Dakar.

"This should be a very important talking point during his visit," said Mbaye, who is also a non-resident senior fellow at the Brookings Institution in Washington.

Senegal's President Macky Sall, seen here in January 2020, will meet Secretary of State Mike Pompeo on the start of the top US diplomat's Africa tour. By Tobias SCHWARZ (AFP/File)

Weeks before Pompeo's trip, the United States said it was also sharply tightening visa rules for citizens of six countries including Africa's most populous nation, Nigeria, and Sudan, whose new civilian government has been seeking international support.

US officials said the countries needed to resolve technical issues related to security, but some critics recalled Trump's widely reported remarks in 2018 when he used a profanity to describe African and poorer Western Hemisphere nations that send immigrants to the United States.

A trip is not a 'strategy'

One former US diplomat expressed confusion over the goals of Pompeo's trip to sub-Saharan Africa, the only region he has not previously visited.

"It's not clear why he is going now and whether this is part of any broader US strategy on Africa, especially when the administration has indicated in just the last few weeks that it intends to exponentially reduce its security and aid investments," said the former diplomat, who requested anonymity to speak candidly.

"You can't just check the box of having an Africa policy by stopping in a few countries on a big continent and then call that a strategy."

Witney Schneiderman, who worked on Africa in the State Department under president Bill Clinton, said Pompeo's trip showed the Trump administration trying belatedly to set "a positive tone on the continent."

But he said that Pompeo would have his hands full explaining the mixed messages from Washington, which include sharp cuts in both the Commerce Department and overseas aid in Trump's latest budget proposal.

"I think that he risks getting caught up in a sort of China-China-China dynamic and really needs to convey to African leaders that Africa is genuinely a priority for the United States," said Schneiderman, who is also at the Brookings Institution.

Then US secretary of state Rex Tillerson receives a cup of brewed coffee during a traditional ceremony at the US embassy in Addis Ababa in March 2018. By JONATHAN ERNST (POOL/AFP/File)

"If he can cut through and promote those messages clearly, then I think his trip will be successful."

The last secretary of state to visit sub-Saharan Africa was Pompeo's predecessor, Rex Tillerson, in March 2018.

He was unusually buoyant in Africa but the trip was not auspicious. On his return, Trump fired him.