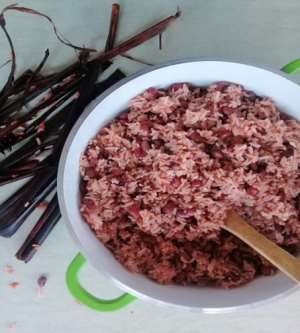 Do you know waakye averts constipation and lowers blood pressure as well? Ok! Follow me as I delve into this interesting subject. Waakye (pronounced waa-chay) is a Ghanaian dish of cooked rice and beans . It is cooked using many of the methods without additional spices and herbs. The rice is cooked with an indigenous leaf ( sorghum leaf sheaths) and black eyed peas (indigenous) or kidney beans (originally from the Americas). It is commonly prepared in the home but it is also sold by roadside vendors. It is a very popular dish in Ghana; Waakye is one of the most common dishes consumed throughout the regions.

A typical waakye meal usually consists of the cooked rice and beans, shito (hot black pepper sauce), stew, some spaghetti, and moist gari (both of which are sometimes mixed with oil from the stew), boiled eggs, stewed meat or stewed/fried fish, stewed wele (cooked-down cowhide) and vegetable salad (which may include cabbage, onions and tomatoes). It may also be eaten with kelewele (fried plantain). It originated from the northern parts of Ghana . The study will focus on the black eyed pea.

The black-eyed pea (Vigna unguiculata), also called black-eyed bean, cowpea or southern pea, is an annual plant from the pea family (Fabaceae) and is grown for its edible legumes. Black-eyed pea plants are believed to be native to West Africa but are widely grown in warm regions around the world. In Ghana, it is commonly used for ‘waakye’.

Black-eyed peas get their name from their appearance. They’re cream-colored with a little black spec that resembles an eye. Although their name would make you think they’re a type of pea, black-eyed peas are actually beans.

Studies on the Health Benefits

One of the biggest black-eyed pea benefits is the high levels of dietary fiber, which helps to promote regular bowel movements and improve the health of the entire body, especially the digestive system. The large amount of fiber contained within black-eyed peas absorbs water in the digestive tract, swells up and carries waste products out of the body. Thanks to being a high-fiber food , black-eyed pea consumption can help prevent constipation, which is always a good thing.

In addition, black-eyed peas and other beans are often associated with excessive flatulence, but research debunks this commonly believed myth. Research conducted by Arizona State University’s School of Nutrition and Health Promotion and the University of Colorado Springs’ Department of Health Sciences examined the perceptions of excessive gas from bean consumptions among adults in three separate feeding studies. Participants consumed a half cup of beans daily for either eight weeks or 12 weeks. Donna M Winham and Andrea M Hutchins 2011 findings, published in Nutrition Journal, were surprising. Only 19 percent of participants who consumed black-eyed peas saw an increase in flatulence, while less than half reported increased gas from eating pinto or baked beans. In addition, only 3 percent to 11 percent reported increased flatulence across all the studies. Ultimately, researchers concluded: “People’s concerns about excessive flatulence from eating beans may be exaggerated.”

Getting adequate iron in the diet prevents anemia, which can cause fatigue and weakness. Anemia occurs when the blood has a lower than normal number of red blood cells or if the red blood cells don’t have enough hemoglobin. Hemoglobin is an iron-rich protein that gives your blood its red color and helps those cells bring oxygen from your lungs to the rest of your body.

Aside from being high in iron, black-eyed pea benefits also include being high in folate, a B vitamin needed to make normal red blood cells. This is important to note since low levels of folate can cause anemia.

Black-eyed peas are rich in potassium, a mineral that helps keep the blood pressure levels at healthy numbers and lowers the risk of heart disease. Some studies have linked low potassium in the diet with high blood pressure. It’s also been shown that heart attack patients who have moderate potassium levels (between 3.5 and 4.5 mEq/L) have a lower risk of death. One cup of black-eyed peas offers you just about 20 percent of your daily potassium needs.

Black-eyed peas are especially high in folate , which is a water soluble B vitamin that plays a slightly different role from the other B vitamins because it doesn’t participate in energy metabolism. Folate’s main function is to help the body make new cells, specifically by playing a role in copying and synthesizing DNA. It also helps the body utilize vitamin B12 and amino acids.

A folate deficiency can cause anemia, poor immune function and poor digestion. For pregnant women, a deficiency in folate can lead to neural tube defects, such as spina bifida. People most at risk of a folate deficiency include pregnant and breast-feeding women, people with liver disease, alcoholics, those on kidney dialysis, and people on medications for diabetes, diuretics and methotrexate.

Just one cup of black-eyed peas can supply over half of your daily folate needs, which means that two cups could completely supply your requirements for the day.

Black-eyed peas are surprisingly high in vitamin A . They have over a quarter of the daily vitamin A needs in one cup. Not only does vitamin A help form and maintain healthy skin and mucus membranes, but it produces the pigments in the retina of the eye.

Hence, one should limit himself to carrots when it comes to improving eyesight because the vitamin A in black-eyed peas can promote good vision, especially in low light.

Risks and Side Effects

Beans are well-known for causing flatulence or gas, but the possibility of black-eye peas making gassy varies from person to person — or not happen at all, as research shows.