A Dream On Àmòtékùn Pillow 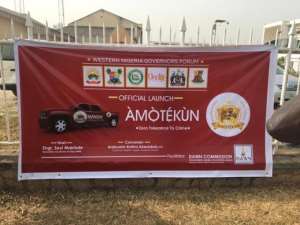 They were coming from all the nooks, crannies and corners to the village center. Men, women, and children. Old, young and the vulnerable. Grim looks accompanied ghastly ones. Drab moods dragged the dim ones. Animosity was pulling annoyance by hand. Peevishness and petulance accompanied each other. Irritation seemed rankled. Aggravation was galled and goaded.

As they gathered in the terrace of the town's Àkòdì, the Baálé was seated on a well rounded pèrègún, padded with a severally folded navy blue velvet. The occasion did not call for the usual comfort of engraved chair, usually engraved to mimick the throne. The general mood was grumpy and grouchy. The people were griping and grumbling. The atmosphere was acidic and acridic. It was far from being a fun fair. Not when the village was under serious existential threats.

Surrounded by his advisers, who are all titled chiefs, the Baálè signaled to Asípa who stepped forward. He was decked in a shoulder -long sleeved jumper on Kèmbè. His fìlà was about three and half feet long as it dangled down beyond his shoulder. His facial contort touted flatness. But his body language was incongruous to that facial contort. Brisk. Pumpy. Zippy. He conveyed an innate combustive energy as he prostrated to pay his homage.

He reported to the Baálè that he, in consultation with Balógun, had all the entrances to the village manned. He explained that they did not want the village to be a victim of surprise attack from the marauders while in deliberation. The whole gathering hailed the Asípa. The Baálè, seemingly satisfied, spoke to praise him too. He expressed personal confidence and the trust of the people in him.

It was the Balógun who stepped forward next. A very diminutive man whose title made him looked like a paradox. His bitsy physiology seemed a deliberate mockery of the office he occupied. For as the Balógun, he was the Field Marshal of the village's army. Easily, he could attract sneering and sardonic outbursts from the untutored. He was the proverbial Koríko tí a f'ojú tínrín, tí nfó ni l'ójú. No one in the village and its environs dared to mess with him without dire consequences.

He was garbed in a medium sized Gbárìyè on an appropriately sized Kèmbè. His Gbárìyè, sumptuous enough to spare swiftness and balletic enough to brook nimbleness, did nothing to alleviate the paradox of his miniature physiology in relationship to the huge importance of his office. If one had called him A kéré korò, Omi ata ò se é fi b'ójú, one would have been perfectly correct.

As he stepped forward, he removed his Abetí Ajá with his right hand and prostrated. He was so flat on the ground that he seemed intent on actually entering the ground to pay his homage to the Baálè. He told the Baálè that the people were angry. He made it clear that all the cross sections of the village and the environs were riled and they were fed up with what was happening.

He noted that the people of the village and adjunct territories were peace - loving. "We always welcome visitors. We believe in farming and commerce. We cherish the philosophy of live and let live. We are long suffering and patient. We don't rush to judgment. We are always fair and equitable. But we don't like to be ridden roughshod over. Enough is enough," he had said shrieking, with the muscles of his neck spasmodically gesturing enough to be seen by close watchers.

He continued, as he was being applauded, "We don't want war. Nobody does. All we want is to be left alone to live our lives the way we choose. But some people have brought war to our front doors. Our men are being murdered or kidnapped and held to ransome. Our women are being murdered, kidnapped and raped. Our children are afraid to go to schools. People are afraid to go to markets and go to their farms. There is insecurity and tension all over. Eléyî ò gbodò rí bè ní ìlú tó l'Óba tó n'Íjòyè."

It was the turn of Ìyálóde to speak to the gathering. Donning a nifty, aró coloured Aso òfì as ìró and bùbá, her Ìpèlè and Gèlè were an alluring rendition in Osùn. The combined colours were said to be an expression of the dour hour in the village. She knelt down to pay her homage and then yíkâ ótún, yíkâ òsì, cleared her throat and began to speak.

She said she has been hearing murmurs about war. That some people are against fighting a war. "Abiyamo lè mi náà. Ìgìrìpá méjì àti omidan kan ló wà nínú ilé mi. Nkò fé f'ojú sun ekún won. Kí làá wá se báyî o? Sé kí gbogbo wa kúkú f'owó lérán k'ógun kó gbogbo wa lo ni?" (I am a mother too. I have two young men and a daughter. I don't want to cry over their loss. What are we to do now? Should we all stand akimbo and allow everyone of us be swept away by war?), she had asked rhetorically.

She explained that whatever had to be done ought to be done. "If we want peace, fighting those who are murdering our people and raping our women would be an enduring solution. We have to sniff them out and their collaborators, clear them off our our village and its environs. If that is fighting a war, then so be it, nítorí a kìí f'iná s'órí òrùlé sùn," she said as she made to sit down.

Olórí Òdó was the next to contribute. He was garmented in a jumpy Èshíkí and Kèmbè. He had no fìlà. He cast himself down on the ground in humility and submission. He wanted to speak in that position but was granted permission to stand on his feet. He observed the needed protocol and went over the miseries that had been the lot of the village since the village had come under incessant attack by heavily armed killer herdsmen.

He spoke about how he had lost two friends and a cousin. He spoke how he had been lucky to mobilize his youthful friends to save his father on the farm, adding that his father was still being nursed by his mother as he spoke. He pointed out that food was becoming scarce as farm products have been continuously and consistently destroyed by the herdsmen. He added that those who had enough to sell were even afraid to come to the market to sell.

He insisted that Bí apá kò bá se é sán, kí á ka lé orí; bí kò sì se é ká l'órí, kí á gee dà nù. He told the gathering that it was time to put an end to this season of anomie, that it was better to die free than to live in slavery. He insisted that he would rather eat his pounded yam with oil on the table that to sip palmy, crunched inhumanly, under the table.

He turned around to face his fellow youths and broke into a song:

Ogun ò kó wa rí, Ogun ò kó wa rí. The rendition of the song went on as I woke up from the dream, only to be reminded that I had my head rested on an Àmòtékùn pillow.