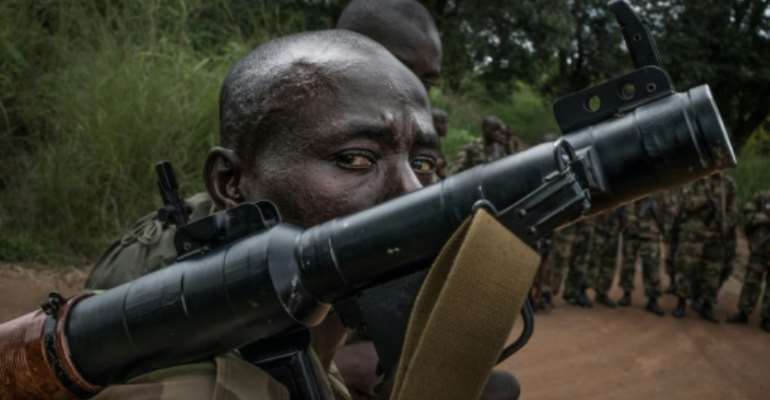 A Central African Republic soldier trains with an anti-tank weapon in August 2019. By FLORENT VERGNES (AFP/File)

The UN Security Council on Friday approved a slight relaxation of the arms embargo on the Central African Republic, an issue that has been a source of friction between France and Russia.

A resolution drafted by France that extends the embargo by only six months to July 31 was approved by 13 votes with Russia and China abstaining.

It allows the CAR to acquire military vehicles mounted with up to 14.5mm weapons, provided the United Nations is notified ahead of time.

According to the diplomats, negotiations on the draft were held amid sharp tensions between France and Russia.

A former colonial power, France did not want any easing of the embargo in light of conditions in the country, according to sources who spoke on condition of anonymity.

The European and African members of the council supported France's draft, but Russia, backed by China, supported Bangui's longstanding call for the embargo to be completely lifted.

Moscow this week proposed a concurrent resolution to France's. However, a compromise was worked out on Thursday that avoided a vote on two resolutions, and the risk that the embargo would be lifted entirely.

France's deputy representative to the United Nations, Anne Gueguen, said she "profoundly" regretted that the resolution was not unanimously adopted.

She said the Security Council is receptive to the CAR authorities but stressed the need for a "responsible approach."

Her Russian counterpart, Dmitry Polyanskiy, complained that none of Moscow's arguments had been taken into account, and he warned these would be raised again in July, indicating the Security Council fight over the embargo would resume in six months.

"We wanted a greater easing of the arms embargo," he said, arguing that while it was useful initially it had become an obstacle to re-equipping the military and security forces.

Niger's ambassador Abdou Abarry, speaking also on behalf of South Africa and Tunisia, said the resolution represented a response to the CAR's legitimate demand to move towards the lifting of the arms embargo.

He said the easing of the embargo would help the CAR's government to retake control of the entire country. 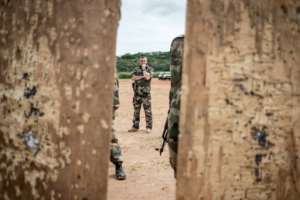 A French soldier participates in a European training mission in the Central African Republic in August 2019. By FLORENT VERGNES (AFP)

The United States noted that Bangui had made no requests for exemptions to the embargo since September, even though the possibility was open to it.

The latest relaxation of the embargo follows a Security Council decision in September 2019 to allow delivery of individual weapons of up to 14.5mm in caliber to the CAR security forces, which was the first time an easing occurred.

The embargo has been in place since 2013, when the CAR was rocked by civil war following the fall of president Francois Bozize.

But the government has long demanded that it be lifted altogether, contending that armed groups continue to control vast areas of the country and can easily resupply their forces through contraband, putting Bangui at a disadvantage.

Since 2017, exceptions to the embargo have been accorded by the United Nations on a case by case basis, including when Russia and France gave arms to the CAR.