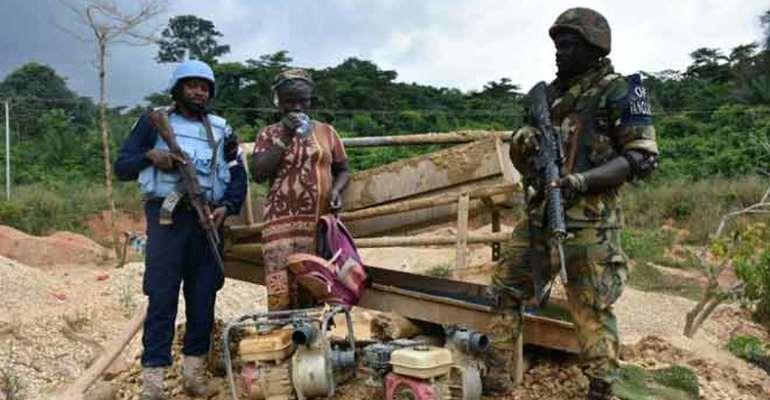 Some 14 suspected illegal miners have been arrested by the Ashanti Regional Forward Operating Base (FOB Ash)of Operation Vanguard at two separate villages; at Hia and Mile all in the Amansie Central District during a routine patrol Monday, 20th January 2020.

The suspects, aged between 21 and 59 took to their heels upon sighting the patrol team. However, they were apprehended by the taskforce as luck was not on their side.

The seized items were sent to FOB Ash storehouse as exhibits, and the suspects handed over to the Obuasi Divisional Police Command, to continue with investigation and prosecution.

Under the command of the Officer Commanding (OC), the Western FOB (FOB West), arrested three Chinese illegal miners at “Gyae Nkota Buo” in the Amenfi Central District in the Western Region on the same day.

The said suspects and the exhibits found on them have been handed over to the Manso Amenfi District Police for investigation and prosecution.

The leader of the operation, OC West said the Chinese illegal miners in the region have adopted various strategies, to make their operations inaccessible to the joint task force.

The OC called on Ghanaians to support the work of the Operation Vanguard Task Force in the Western Region in particular, and across the country, generally, to help save the environment and water bodies.

Operation Vanguard is a Military Police Joint Task Force (JTF) set up by the President of Ghana 2017 to combat the operation of galamsey in Ghana.

Galamseyers are miners without legal concession to mine and have over the years depleted Ghana’s forest cover.

Their activities also pollute water bodies due to the crude and unregulated nature of the mining process.