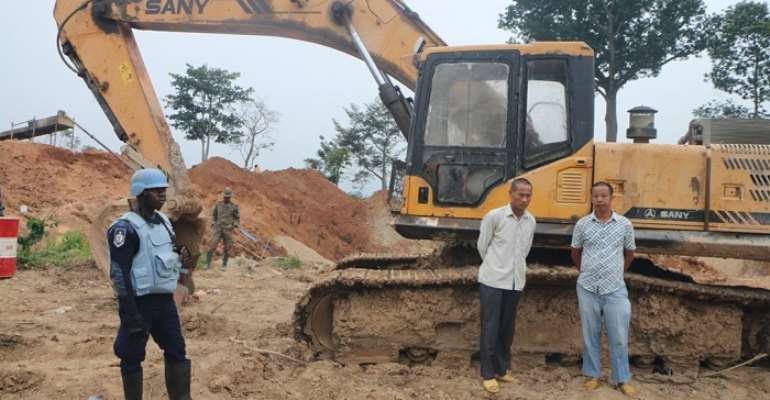 The Media Coalition Against Galamsey and OccupyGhana have expressed disappointment over the alleged disappearance of excavators used for illegal mining activities popularly known as galamsey.

Minister for Environment, Science, Technology and Innovation, Professor Frimpong Boateng, recently announced that hundreds of seized galamsey excavators have disappeared from District Assemblies around the country.

According to the Coalition and OccupyGhana in a statement dated January 29, 2020, “Our deep concern at this revelation stems from the fact that the authorities have simply once again failed to follow and enforce the law.

The statement noted that “the inability of the government to enforce the law, from the facts as we know them, is only matched by the brazenness of the illegal miners.”

It added that “We have a number of questions for the government that require answers; and we respectfully demand those answers.”

“First, under the 2006 Minerals and Mining Act, it is illegal for anyone to “erect equipment… for the purpose of mining” without being the holder of either a mining lease or a small-scale mining licence. Everyone who does this commits an offence. The government has to explain to Ghanaians whether the persons from whom the equipment was allegedly seized were also arrested. If that did not happen, the government should explain why it did not happen. Or, were the illegal miners also allowed to disappear just like the equipment?”

Second, the law then provides that upon the arrest of illegal miners, the equipment they were using “shall, regardless of the ownership…, be seized and kept in the custody of the police.” It is for very good reason that the law demands that the equipment should be kept by the police, and no other institution. The government therefore has to explain to Ghanaians why the equipment allegedly seized was kept with District Assemblies and not the police. Was this deliberate? Was this to make it very easy for the equipment to simply 'disappear'?

Did anyone take an inventory of the seized equipment and if so where is that inventory? Which public officers were responsible for flouting the law?

“Third, the Act demands that the arrested persons should be tried in court and then upon conviction, the court is empowered to “order the forfeiture of any equipment… seized.”

“The government has to explain to Ghanaians whether the persons from whom the equipment was seized were duly prosecuted, and if not, why not? ,”it quizzed.

“Without prosecution, the seized equipment cannot be forfeited in the manner the law demands. Are any prosecutions still taking place? If so, have there been any convictions? And if so, did the courts order forfeiture? Is the government able to publish a report on these matters?,” it asked.

“we also need to know from the government whether all existing mining leases and small-scale licences have now been submitted to Parliament for ratification as is required under both the Constitution and the Minerals and Mining Act,” according to the statement.