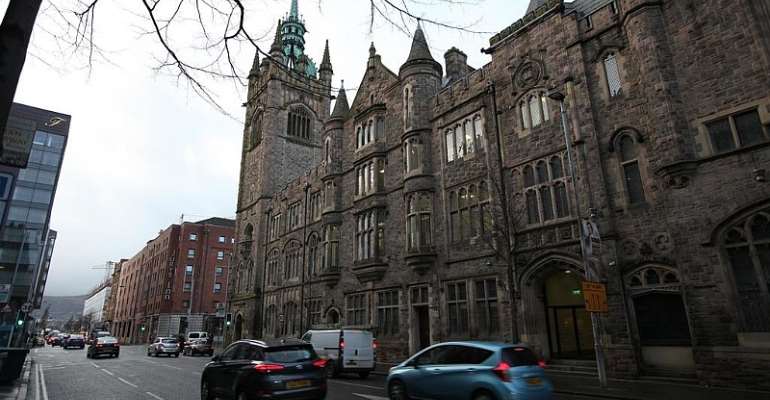 Northern Ireland has been at peace since the Good Friday Agreement of 1998. However, with Brexit, is it possible that  the precarious political balance in the province will be upset? RFI spoke to John Barry, a political scientist and Professsor of Green Political Economy at Queens University in Belfast, who thinks the peace process is not in danger. However, he is disappointed that Unionists may be looking at France's Yellow Vest movement for inspiration.

The entance to the 19th century Crown Liquor Saloon in the centre of Belfast, with its elegantly carved wooden boxes where guests can seclude themselves to have private drinks, features a mosaic of the crown of England.

According to popular wisdom, the couple who initially ran the place, a catholic husband and his loyalist, protestant wife came to a bizarre agreement: when the wife proposed to have a picture of the crown in the bar, the husband readily agreed, but insisted it be placed “on the floor, so everybody can trample over it.”

Brexit seems, paradoxically, to be something similar in Belfast.

“Northern Ireland prepares for Brexit in opposite ways, because we are a divided society, dealing with a long legacy of conflict,” says Barry.

He points out that the January 31st Brexit deadline may have been helpful in getting Northern Ireland's local government, at the Stormont Palace, back on track after having been suspended for years. Had it not, “Northern Ireland would be the only part of the United Kingdom without any government in terms of leaving and the negotiating period we are entering into,” he says.

But views on what Brexit means differ enormously.

“Irish nationalists are using this as a jumping off point for accelerating the debate about a united Ireland,” he says. “ [That is to say, debating how] to get rid of the border and have some sort of re-unified state on the island.

But Unionists, protestant pro-British brexiteers, are extremely wary. Barry says that many feel betrayed by Boris Johnson. ”[He] threw them under the bus. He sacrificed them, and went ahead with a deal the Democratic Unionist Party (DUP) didn't want. So that party now has really nowhere left to go, because the deal has been done; they have no longer any leverage in Westminster.”

The previous Conservative government under Theresa May was dependent on the support of 10 MP's of Northern Ireland's DUP, who blocked her initial deal with the EU, causing the debate to drag on for months.

Monumental error
Barry adds: “They have made a monumental error. They were the only major party in Northern Ireland to support Brexit, and they supported the last Conservative government, when the Conservative Party needed the 10 [DUP] MP's. It gave them some leverage.

"But everything changed after Boris Johnson won an absolute majority at the December 12 elections, completely deflating the DUP's influence."

Boris Johnson deal “has [placed] this economic regulatory border in the Irish Sea". The DUP adherents “translate this economic border into a constitutional separation of Northern Ireland and the United Kingdom," Barry adds.

In a worst case scenario, Brexit, in the eyes of the Unionists, could lead to the break-up of the United Kingdom.

“If Scotland now is on the path of independence, this leads many Unionists to feeling isolated with no reciprocity from London,” says Barry.

Polarisation
On the May 22, 1998, the governments of the UK and Ireland signed the Good Friday Agreement (GFA) putting an end to long decades of 'troubles' where sectarian strife between catholics and protestants cost the lives of hundreds and wrecked the fabric of society. How does Brexit affect this agreement?

“There was some talk that somehow Brexit, and maybe having customs posts on the Irish border, would lead to conflict,” says Barry, admitting that it has led to a polarization of communities in Northern Ireland. Support or no of Brexit broke down on sectarian lines – if you were a protestant British Unionist, you voted for Brexit, and if you were a catholic nationalist republican you voted to remain – so the Brexit vote itself, and its aftermath has led to a polarization,” he says.

While believing that Brexit will not immediately fuel violence similar to what Northern Ireland saw before the Good Friday Agreement, Barry says that loyalists may react.

“I'm worried about a reaction of a “gilets jaunes” type. There's been open talk among a lot of the activists in the loyalist community: they are looking how the working class mobilizes in France," he said.

"I wouldn't be surprised if something like tha happened, particularly around the ports in Northern Ireland, where goods are coming in, that they vent their displeasure about Brexit happening under conditions they didn't like."