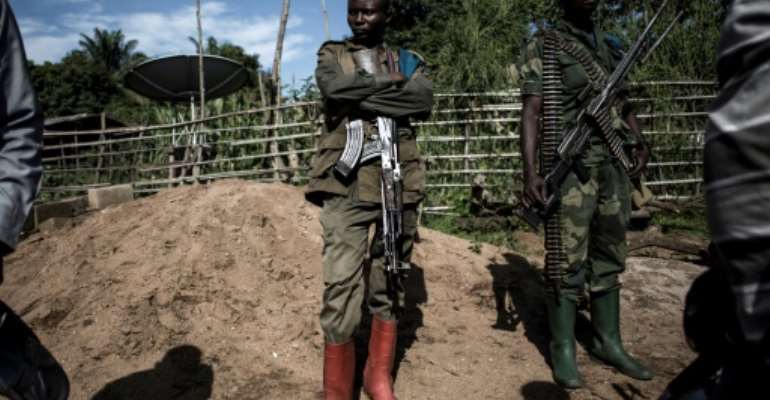 Congolese soldiers launched a massive offensive against the ADF, a ruthless militia of Ugandan origin. By John WESSELS (AFP)

Nearly 200 civilians were killed in violence last month in two volatile provinces in the Democratic Republic of Congo's lawless east, the highest toll since June 2017, a monitor said Monday.

"Armed groups and security forces killed at least 197 civilians over the course of the last 31 days of 2019," in the North and South Kivu provinces, said the Kivu Security Tracker, a joint project of the Congo Research Group, based at New York University's Center on International Cooperation, and Human Rights Watch.

It "was the deadliest month for civilian deaths ever recorded by the Kivu Security Tracker since its creation in June 2017," a statement said.

The bulk of the civilians deaths occurred in the restive Beni region, with 120 victims slain "in attacks mostly attributed to the Islamist rebels of the Allied Democratic Forces (ADF)," it said.

The ADF is a ruthless militia of Ugandan origin.

Several militias operate in eastern DR Congo, a bloody legacy of two regional wars in the 1990s that dragged in the country's neighbours.

Violence has spiked since the end of October when the DR Congo army began an offensive against the ADF and the militia responded with a series of massacres against civilians.

"Adding to the Beni crisis, a new deadly front was opened with the Congolese military offensive against the Rwandan Hutu uprising by the National Council for Renewal and Democracy (CNRD).

"This attack successfully led to the rebellion retreating from the bases it had occupied since early 2019.

"But many civilians were also killed, mostly among rebel fighters' families. KST has been able to confirm the violent deaths of at least ten non-combatants," the report said.