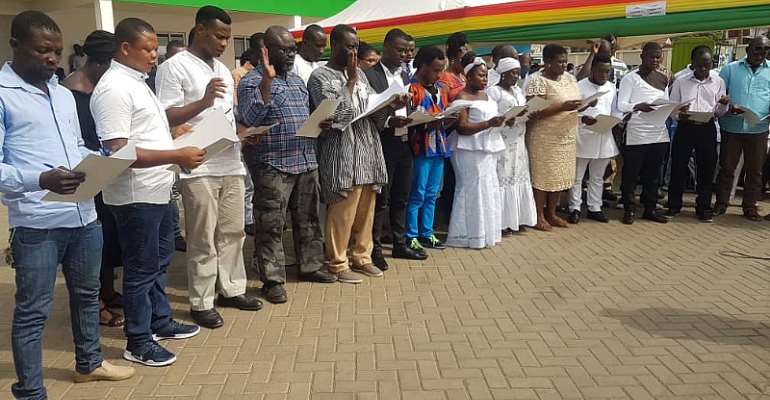 The Korle Klottey Municipal Assembly (KKMA), one of the newly created Municipal Assemblies in the Greater Accra Region has, in accordance with the constitution, performed the inaugural ceremony of it's new elected Assembly members.

The inauguration which took place at the forecourt of the freedom and justice park Thursday saw the swearing-in of 18 assembly members, unit committee members and Presiding members.

The inaugurated assembly is mandated to lead the development aspirations of the Korle Klottey Municipal Assembly for the next four years.

In a speech she delivered on behalf of President Akufo Addo at the event in Accra, the presidential advisor on HIV/AIDS, H. E Dr. Mokowa Blay Adu-Gyamfi advance the implementation of government policies.

She said the government would need them to support their District Chief Executive to pursue policies and programs aimed at improving the welfare and wellbeing of the people.

On strengthening revenue generation of the assembly H.E Dr. Mokowa Blay Adu-Gyamfi advised members to take advantage of efforts being made by the government, through the ministry of local government and rural development, in the area of property rates, in addition to other innovative systems, to enhance the district’s Internally Generated Fund (IGF).

She explained the assembly can achieve that (improvement of its internally generated fund) by vigorously pursuing street naming, property addressing and working hand-in-hand with the National Digital Property Addressing System

Gracing the occasion, the member of parliament for KKMA, Zanetor Agyeman Rawlings tasked members to work with the Assembly to address its challenges She said members should ensure, bye-laws are enforced in order to improve sanitation within the assembly.

Municipal Chief Executive, Hon. Samuel Nii Adjei Tawiah reminded them that the role of either an Assembly member or Unit Committee member was a sacrificial one and must, therefore, dedicate themselves to serve the cause of the community.

Government extends electricity to seven communities in Savan...
26 minutes ago