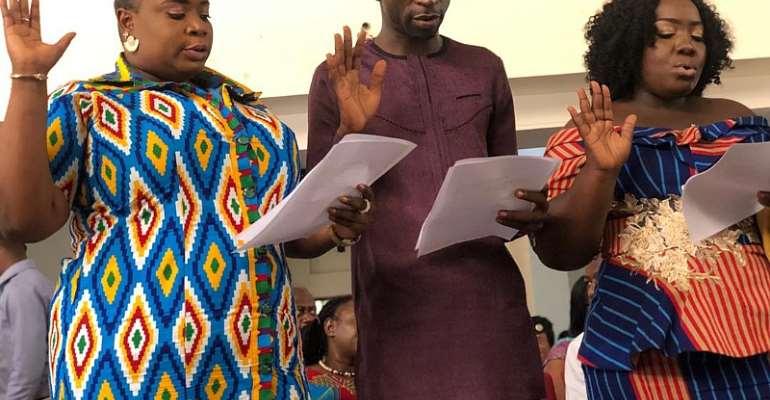 The Adentan Municipality in the Greater Accra Region has twenty (20) Assembly members including members from the Member of Parliament, Municipal Chief Executive, six government appoints and members from the electoral areas as well as the sixty (60) Unit Committee members. On Thursday 23 January, 2020, the newly elected Assembly and Unit Committee members were sworn-in.

During at the event, the Municipal Chief Executive, Daniel Alexander Nii Noi Adumah urged the Assembly members to work hard to ensure that the municipality becomes the best in Ghana and to make sure that the municipality is clean. He entreated everyone to live peacefully. Also, present at the occasion was the Member of Parliament for the Constituency, Yaw Buaben Asamoah, who was happy to see a high number of youth elected which accounts was violent free.

The former Minister for Gender, Children and Social Protection and former parliamentary aspirant for the NDC in the Adentan Constituency, Nana Oye Lithur, had also on the occasion expressed her heartfelt congratulations to the newly sworn in Assembly and Unit Committee members of Adentan.

According to the former Minister, these Assembly and Unit Committee members have proudly offered themselves to the services of Adentan Constituency, their journey to climb to great heights and achieve all their aspirations have started. She urged them to fearlessly represent and serve the people of Adentan and their electoral areas and she wished them God’s protection, grace, favour and wisdom.

Government extends electricity to seven communities in Savan...
4 minutes ago