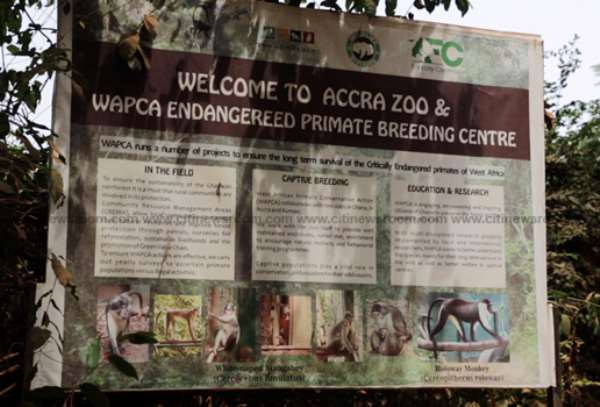 Management of the Accra Zoo says the facility recorded a 100% increase in patronage last year, translating into a total of 20,000 visitors for that year.

This development came after Citi News threw the spotlight on the forgotten Zoo in 2018, sparking interest in the place.

According to the manager of the zoo, Stephen Tamanja, Citi News' intervention has turned the fortunes of the tourist site.

“I'm very grateful for the visit you made last year. There have been positive changes. Since you came, patronage has increased tremendously and we are very grateful for your intervention at that time,” he said.

The zoo has also seen additions to the animals on display since 2018. These include lions that patrons had been longing to see for many years, deers and a donkey.

However in the past, what management spent on feeding for the animals, enclosures and personnel could not be compared with the meager funds the facility made in entry fees. However the accountant for the zoo, Constance Doe-Lawson noted that this was a thing of the past as it exceeded its revenue by 100% for the previous year.

The Accra Zoo does more than bring its visitors closer to animals. It also serves as a safe space for various species endangered in their natural habitats.

By accommodating the Endangered Primate Breeding Centre run by the West African Primate Conservation Action (WAPCA), there is hope for the White-naped Mangabey and the Roloway Monkey.

According to the International Union for the Conservation of Nature, these two species are part of 25 most endangered primate species in the world.

In all, the zoo has over 150 animals of 30 species on exhibition. For as low as GHS2.00 for Ghanaian children and GHS10.00 for adults, one can enjoy a full tour.