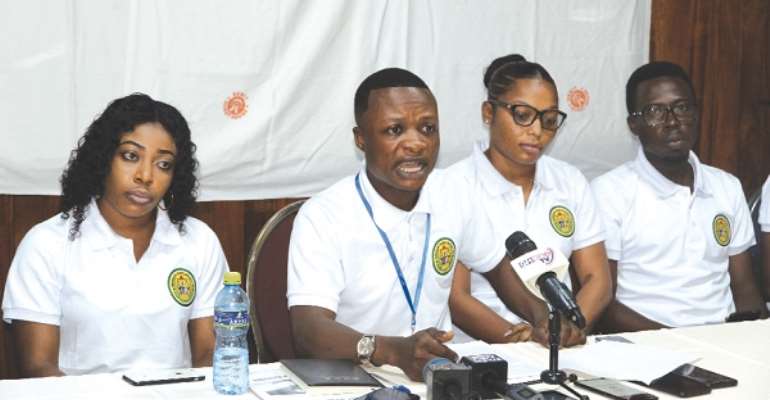 A group calling itself Teachers and Trainees Advocacy (TTA) has described the campaign promise made by former President Mr John Dramani Mahama, to cancel the mandatory national service and licensure examination for teachers if elected as President in the 2020 election as damaging.

It said the cancellation of the mandatory national service would endanger the future of teacher trainees as they would not be teachers forever but might seek employment in other professions which might need the service certificate as a basic requirement for employment.

"Teachers will not remain teachers forever. We are divinely destined for several other job opportunities and we won't sit aloof and allow Mr Mahama's "abolishing spree" to endanger the well institutionalised service that would eventually make our dreams of also becoming members of parliament, ministers, among others in future come true,”it said.

Press Conference
Addressing journalists in Accra yesterday on what it describes as "misconceptions" put out by Mr Mahama concerning the mandatory national service and teacher licensure exam, the national convener of TTA, Mr Patrick Karikari Antwi, said: “The state of newly trained teachers is better with the implementation of the mandatory service and licensure exam as these two key processes have greatly elevated the status and the standard of newly trained teachers from the various universities and colleges of education in the country.”

Misconception
Mr Antwi alleged that Mr Mahama had created a misconception that direct and automatic posting of qualified newly trained teachers from the various colleges of education had been cancelled by the Ministry of Education.

“The Ghana Education Service (GES) adopted an online system where graduates from the various colleges of education are required to apply online to be posted. The Educational Management Forensic System shows the various schools with vacancies,” he explained.

“We find it disturbing when Mr Mahama makes it appear that such privileges have been stripped off newly trained teachers as he continues sharing on different platforms that he will ensure direct posting of teachers when he is sworn in as president in 2021,” he said

Warning
Mr Antwi asked the NDC to desist from making promises of cancelling the national service and teacher licensure exam, adding “we are very comfortable and will want to study with great tranquillity, free of emotions and psychological disturbances from such political talks and promises.”

“The TTA is tired of the chunk of promises that are perpetuated by political parties especially in times they want to clinch onto power.

The field of education that seeks to nurture future leaders is ironically not being taken seriously as it’s always interspersed with frequent establishment and cancellation of educational policies by governments that preside over the country” he stated.

Background
Mr Mahama in a Facebook Live interaction in December 2019 announced his intention to cancel licensure examination for teachers when voted into power.

He explained that what was needed was an improvement in the quality of teaching and examinations at the colleges of education.

Government extends electricity to seven communities in Savan...
8 minutes ago