Family Of ACP Agordzo Claim He Is Still In Detention 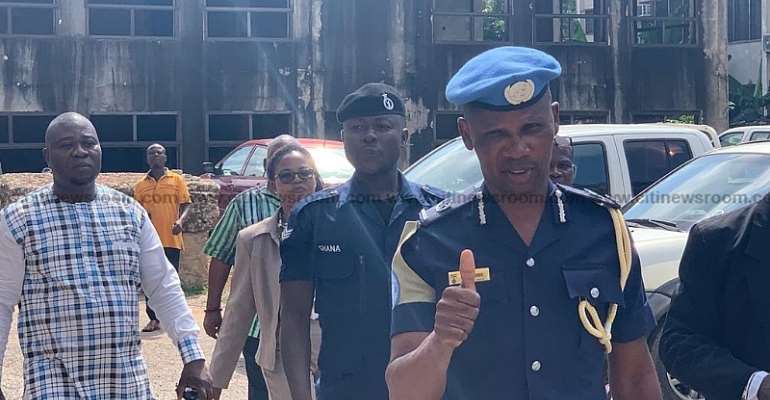 The family of ACP Benjamin Agordzo, who is on trial for allegedly plotting to destabilize the country, have alleged that their man is still being held in police custody.

According to the family, it is said that despite being granted bail by a court in Accra on Tuesday, the police are still detaining him.

His brother, Cephas Agordzo, described this as ‘persecution’ of his brother.

According to him, ACP Agordzo who was granted a self recognizance bail to the tune of GHS500,000 met all the requirements and deposited his passport at the court’s registry as prescribed by the court but the police refused to take him to the court to sign off for his bail.

“The court set conditions that he has been given self-recognizance bail and that he should deposit his passport at the High Court registry which we did yesterday [Tuesday], and when we came back to the police custody, they called again from the court that the police should bring him back to court to come and sign his bail, but the police refused to do that from yesterday [Tuesday],” he said.

Speaking on Eyewitness News on Wednesday, Cephas Agordzo said the police failed to honour the court’s invitation and have kept the embattled police officer in custody for the whole of Wednesday.

“As we speak now, it had to take the court to write to the IGP to produce him in court to sign his bail and we see this as an agenda of persecution, not prosecution and they’ve not even given any reason why they couldn’t take him to court,” he added.

Citi News' Hanson Agyeman who monitored the court proceedings on the bail application on Tuesday said lawyers of the suspect while making their case argued that their client had already presented a nine landed property to justify his application for bail. Background

ACP Dr. Benjamin Agordzo was on several occasions denied bail by the High Court after his arrest over his alleged involvement and contribution to the 'Take Action Ghana' group which the State claims had devised a detailed plot to destabilize the county.

He was charged with abetment to commit crime namely treason felony and was on remand in police custody.

Lawyers of the policeman had argued that their client according to the law could be granted bail pending trial.

In their arguments before the court, the lawyers led by Martin Kpebu said their client was entitled to bail and will make himself available for investigations or trial if needed.

But the courts had always dismissed these applications for his release.

On one of the occasions, for instance, his bail application was denied after the High Court in Accra described it as premature due to the fact that investigations on the case were still ongoing.

The judge, George Buadi also said the position of the applicant as a senior police officer can make him influence ongoing investigations.

The family of the accused senior police officer had made claims that personnel of the Criminal Investigations Department (CID) of the Ghana Police Service were scheming to plant false evidence on his electronic gadgets.

A brother to the suspect, Cephas Agordzo, alleged that the CID personnel used dubious means to seize the gadgets after the family resisted attempts by the investigators to conduct a search on the gadgets without the presence of witnesses.

Why won't National Security operatives assault journalists i...
41 minutes ago