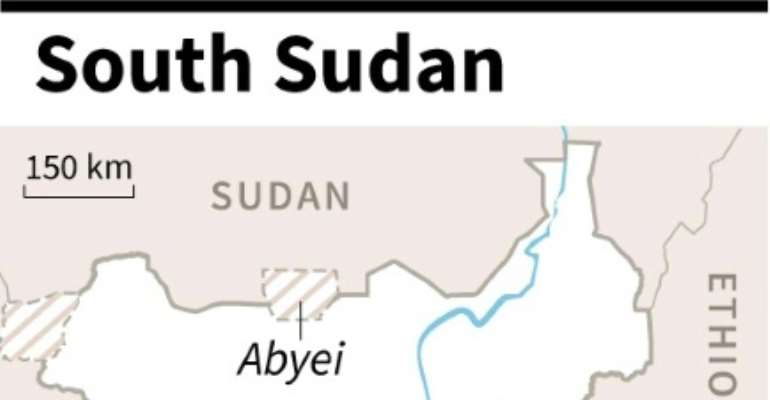 Abyei has been contested since South Sudan gained independence in 2011. By (AFP)

At least 19 people were killed Wednesday when suspected nomadic Misseriya herders from Sudan attacked a village in the disputed oil-rich region of Abyei along the border of South Sudan, according to UN peacekeepers, although local authorities gave a much higher toll.

Abyei has been contested since South Sudan gained independence in 2011, while there have long been tensions between the South Sudanese Ngok Dinka community and the Misseriya herders who traverse the area looking for grazing.

The United Nations Interim Security Force in Abyei (UNISFA) which has been deployed to secure the area since 2011 said in a statement that "19 people are reportedly dead and 25 wounded while three children are reportedly missing and 19 houses burnt from the Dinka community."

However Kuol Alor Kuol, the chief administrator of the Abyei area, told AFP that the number of dead stood at 32.

"Thirty-two people were killed among them children and women, and secondly about 24 people are wounded ... and about 15 people including children were abducted and 20 houses burned," Kuol said.

He said the wounded had been evacuated to a hospital in the town of Agok which is run by Doctors Without Borders (MSF).

The UNISFA statement said it had received reports that many armed Misseriya and Dinkas were currently converging in the general area of Kolom.

"UNISFA troops have been deployed in the general area of Kolom to control movements and contain the situation."

The peacekeeping operation said a similar incident on Monday had left three people dead in the area.

In 2011, the UN Security Council deployed the peacekeeping force to the area after deadly clashes displaced some 100,000 people.

UNISFA is made up entirely of Ethiopian troops, with some 4,500 soldiers on the ground.

The statement said the incident came amid efforts to hold "co-existence conferences" between the two communities and was "very worrisome and a great cause for concern to the mission."

"The United Nations Interim Security Force for Abyei (UNISFA) strongly condemns this attack as it can only contribute to the tension and chances of renewed violence in the area."

Sudan's government spokesman Faisal Mohamed said in a statement that the attack was "unacceptable".

"The government of Sudan will play its role in protecting civilians and calls UNIFSA to move immediately to the village to protect the civilians there," he said.

Meanwhile US Assistant Secretary for African Affairs Tibor Nagy called on Twitter for "calm and restraint" in the area.

The UN Security Council in 2018 warned that the situation in Abyei and along the Sudan-South Sudan border "continues to constitute a serious threat to international peace," and called on the two countries to show concrete progress on border demarcation and monitoring.