Pedestrians most at risk in Paris's territorial street war 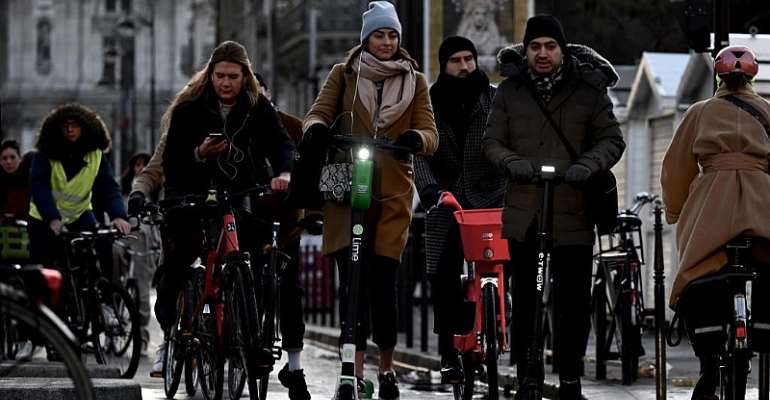 Paris on Wednesday laid to rest 11-year-old Sixtine, tragically knocked down by a truck on her way to school last week – while crossing the road at a green light for pedestrians.

Her death on 13 January, in a residential part of the 16th arrondissement, has fuelled fiery debate over road safety in a city that has endured six weeks of transport chaos and back-to-back strikes.

While the number of pedestrians in the capital is rising, so too is the number of bikes and scooters, causing anxiety and congestion that have led to a spike in “road rage” incidents – particularly during the strike period, which ended on Monday.

Sixtine's untimely death, on a marked zebra crossing, has raised serious questions over safety in a city where pedestrians must now vigilantly scan footpaths for electric scooters, cyclists and even motorbikes, in addition to checking for vehicles on the streets.

Fight for footpaths
The League Against Road Violence, a national association of volunteers working to save lives on French roads, has warned that pedestrians are being forced to contend with an alarming number of two-wheelers on footpaths and protected passageways.

“Pedestrians in urban areas are constantly seeing their rights violated – and this battle for space will be lost by those who are most fragile: the elderly and even children,” Perrichon says.

“All the laws in the world will be useless without proper controls … It should be remembered that footpaths are an unshared sanctuary … because when you see a cyclist grazing pedestrians, that is something to worry about.”

Paris promotes plan to get people walking
Since 2014 authorities in Paris have been busy implementing an “action plan” to promote walking – widening footpaths and redeveloping public spaces to improve the flow of pedestrian traffic.

While road safety experts have welcomed a drop in the number of cars, the capital's roads remain dangerous and unpredictable, with 16 pedestrians among the 34 people killed in 2019 alone (followed by 11 scooter deaths and six cyclists).

The victims are mainly elderly people and children who do not yet know how to circulate in this new urban environment, warns transport economist Frédéric Héran, author of Le Retour de la Bicyclette, or The Return of the Bicycle.

Héran, who has followed the evolution of bike use since the 1970s, says the three-fold increase in bicycle traffic observed in Paris during the strike period is similar to the spike seen during widespread strikes in 1995.

“There are always two categories: daily users and occasional users and, during a strike, this second category joins the first,” he told left-leaning newspaper Libération.

Search for effective answers
Among suggested solutions to what's been described as an unprecedented “territorial war” on Parisian streets is the idea of equipping scooters with cameras and sensors that would prevent them from being ridden on footpaths.

More than 60 percent of journeys in Paris are made on foot, says deputy Paris mayor Christophe Najdovski, who is also in charge of transport.

This means pedestrians should be the city's priority – he told Le Parisien – hence the widening of footpaths in more than 150 streets, or the “returning of more than 10 hectares” to people on foot.

A symbol of this policy is the banks of the river Seine, off-limits to cars since 2016, as well as the redeveloping of large Parisian squares such as the Panthéon, Nation, Bastille and Madeleine, which have doubled the amount of space reserved for pedestrians.

Najdovski concedes that changing bad behaviour will be a major challenge, though. “We must constantly remember that footpaths belong to pedestrians … This is why there needs to be zero tolerance for two-wheeled motorised vehicles parked on footpaths, and why people who ride scooters on footpaths risk being fined.”

This will bring little comfort to the grief-stricken family and friends of 11-year-old Sixtine, made to say their goodbyes on a sunny Wednesday afternoon.

To pay their respects, hundreds of people gathered for a kilometre-long "white march" along the Seine, setting off from the from the Maison de la Radio and passing by the intersection where the young girl lost her life, before ending at the nearby Place Jean Lorrain.

An investigation has so far determined Sixtine was the victim of a "blind spot". An elected representative of the 16th arrondissement confirmed the danger posed by this particular intersection had already been flagged up with Paris's town hall.