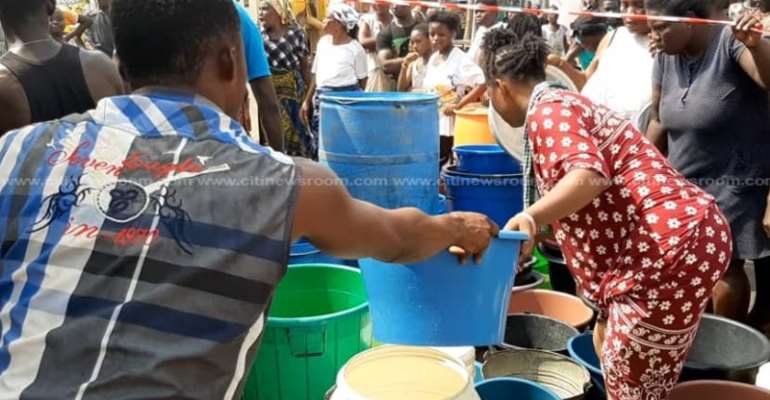 The Chief Executive Officer of the Ghana Water Company Limited, Dr Clifford Braimah, says his outfit is doing its possible best to ensure that Ghanaians have water flowing through their taps.

This comes on the back of numerous reports received by Citi FM from Ghanaians in different parts of the country over the irregular flow of water.

In an interview on the Citi Breakfast Show on Monday, Dr Braimah said factors such as obsolete pipes and unplanned settlements are to blame for the challenges.

“We anticipated this since November and all regions were asked to give out their plans towards the lean season where we don't have volumes of water in some of our reservoirs and where consumption is going to go very high. What is happening in Accra is that volumes of water have not increased over the years because, after the 2015 commissioning of the Kpone water system, we haven't added any volumes to Accra. Sometimes we have these burst pipes that take longer to repair so it leads to some delay. You go to East Legon, the lines we put there those days were very thin because the population then was small. Now the population is so much and so at any given time you have a cost.”

“So people should bear with us. We are doing everything possible to make sure that people get water at least within a week and if within one week they don't get, then there might be a localised problem. We'll get to the district, then the district will find a way of getting there and rectify the problem,” he assured. Sekondi-Takoradi water crisis

Meanwhile, the Ghana Water Company has begun rationing water in Sekondi-Takoradi in the Western Region, as a result of the dry season.

Speaking in a Citi News interview, the Regional Communications Manager of GWCL, Nana Yaw Barima Barnie, said the situation will normalize when the rainy season sets in.

“I must say that this is unfortunate but that is the best way we can ensure that everybody gets their first share of the water because if we don't do the rationing, what is going to happen is that because the pressures are going to be low due to the low quantities of water we are producing, only residents or customers who live in low line areas or those who live close to our reservoirs will be getting the water.”

“And I would please urge our customers especially those in Takoradi to endeavour to get storage facilities. We are going to continue with this rationing until the rains start coming in,” he emphasized. Situation in Northern Ghana

Tropical and Sahel regions of West Africa, including Ghana, are currently experiencing the dry season and this means many communities have been ushered into a season marked by the long search for water and thirst.

The situation is worse for areas that have not been connected to pipe-borne water.

Communities like Nyeshie and Damakon-Yeli in the Northern Region have over the weeks been facing acute water shortages that are likely to wreak havoc on the residents due to the onset of the dry season in the country.

The dams through which residents access water has begun drying up due to the harmattan, and they still face the risk of complete water shortage because they do not have access to pipe-borne water either.

Yaw Elisha, a resident of Nyeshie said: “the dam is even drying up and we are more scared”.

“We suffer a lot in this community. We don't have taps. We only have three pipes here serving the people. They open the pipes for one day in a week. We only drink from the dam. Sometimes we apply alum and that is it”, he added.