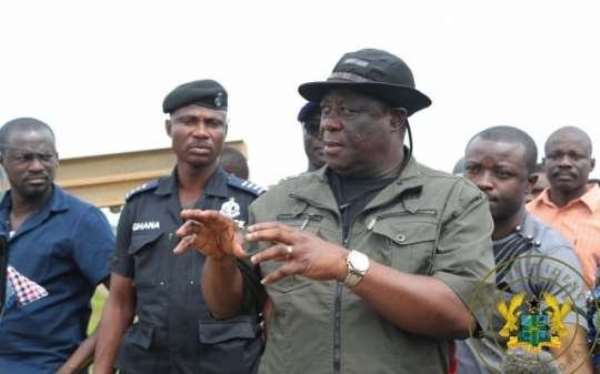 The medical bills of all accident victims of the last Tuesday's Dompoase car crash including mortuary bills will be settled by the government, Minister of Roads and Highways, Mr. Kwasi Amoako-Atta, has disclosed.

He made this known over the weekend when a delegation of government officials including Mr. Kwaku Ofori-Asiamah, the Transport Minister and Mr. Kwamena Duncan, the Central Regional Minister, visited the injured who are still on admission at the Cape Coast Teaching Hospital (CCTH).

Mr Amoako-Atta asked the hospital authorities to furnish the Ministry with all other bills that the hospital would incur through the Central Regional Minister.

Consequently, Dr. Eric Ngyedu, the Chief Executive Officer of the CCTH, has directed that monies earlier paid by some of the victims be refunded once they provide their receipts while a comprehensive report on patients including all those who would need surgical implants be compiled for onward submission to Accra.

Briefing the team after the visit, Dr. Ngyedu said of the 26 patients admitted and several others treated and discharged that fateful Tuesday, 17 including two children some of whom would require surgery, were currently on admission at the male, female and pediatric wards.

Also, he said, five of the 34 bodies brought to the hospital mortuary are yet to be identified.

He expressed gratitude to Mr. Duncan for his sterling leadership and thanked the government for the intervention that would bring a lot of relief to the families of the patients and ease the work of the medical team

The delegation including Mrs. May Obiri Yeboah, the Executive Director of the National Road Safety Authority; and COP Paul Manly Awini, the Regional Police Commander, also inspected the scene of the accident at Dompoase Junction.