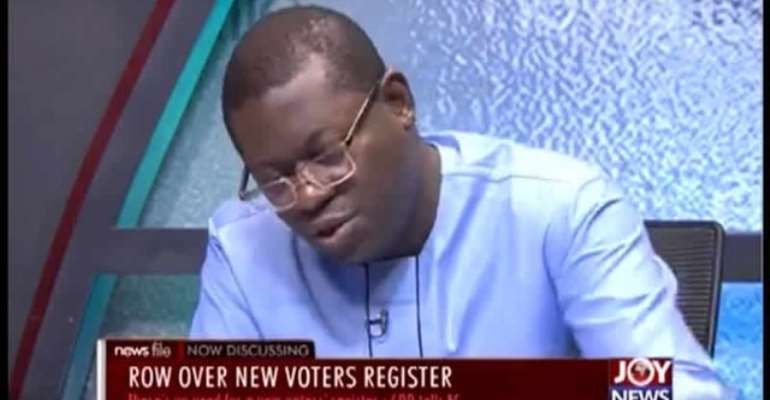 He criticised the EC for not consulting political parties, activists, Civil Society Organisations (CSOs) and other interest groups before deciding to ditch the current biometric voting system for a new one.

“As far as I am concerned, the EC is engaged purely in a PR exercise to legitimise a decision they have already taken. Because this is not consultation,” he said about EC’s seeming active communication on the matter.

Mr Simons made the comments on Saturday’s edition Joy FM/MultiTV’s Newsfile that focused solely on the controversy over the EC’s push for a new voter’s register.

His first argument against the controversial process for a new voters’ register concerns the transparency and the timing of EC’s public announcement that it will compile a new register for the December 7, 2020, presidential and parliamentary elections.

He said it was clear that the EC decided on a new register as far back as December 2018, however, the processes leading to a tender, published later in April 2019 has not been transparent.

“Nobody in media or civil society has an idea what is the research that has led to this outcome, who were the people that were consulted?” he asked.

In his view, the EC was currently focusing on “procurement as opposed to problem-solving,” and urged the Commission to take the views of some 18 CSOs opposing the process seriously.

“The 18 CSOs represents, as far as I am concerned, one of the broadest institutional spectrums we have in this country from activists through to research-based organisations,” he stated, noting that they will not take a stance against the process if they were convinced that it was a bad decision.

His second argument is that the architecture of the current biometric voting system was multi-component, adding that “it is not entirely true that the system as it was designed cannot be separated as far as vender design is concerned.”

He revealed that after studying the architecture of the current system, there was every indication that should there be problems with specific components of the system, they can be dealt with.

He said EC’s proposal for a voters’ register was analogous to uprooting an entire network and implement a whole new system, “as opposed to incremental and surgical upgrades where it is most important.”

His third point counters EC claim that the existing system has not been upgraded since 2011.

“You can’t tell us that all the devices started in 2011…I have read all your budgets…and I have seen all your procurement plans and I know that you continue to buy equipment. In the Charlotte Osei affair, we saw that STL, for instance, had made offerings to replace some of these equipment the EC had gone ahead to make procurements when she abrogated and renegotiated. We know those numbers. We know what was purchased and we know the pricing,” he stated.

He said contrary to EC’s claims, there have been procurements over time.

In his final arguments, he urged the EC to take a policy decision to calibrate the biometric devices to solve the EC’s often cited point that the error rates recorded for the current system were high.

“To the extent that we have a system that is not 100% right, our way of determining whether we are improving or getting worse is to look at the conduct of the elections themselves,” he stated.

He also countered the EC’s claim that some $56 million quoted as the cost for the procurement of a new biometric system was lower than what it will cost to upgrade the existing one.

“Is that $56 million the result of a tender process, was that the lowest bidding proposal or lowest bidder? Where are you getting that figure from?” he asked the EC.

He argues that had the EC had done a request for quotation, it would find that the $56 million it is quoting as reasonable is actually very high.

I weep for Ghana for allowing Medusa-like head judgement de...
41 minutes ago