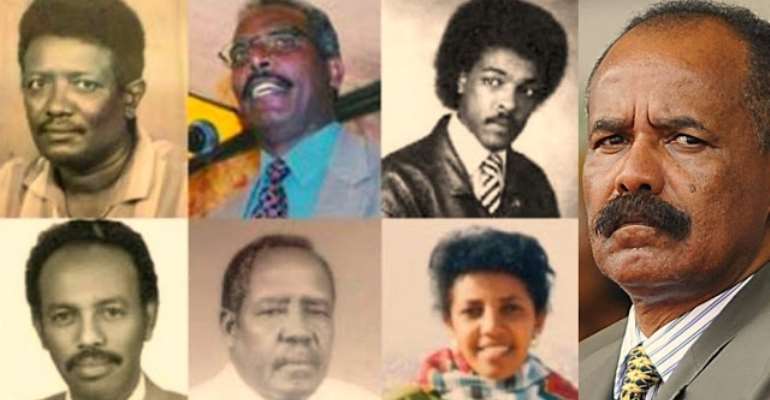 A few of over hundred of political prisoners under the rule of the tyrant Eritrean dictator, Isaias Afewerki

The United States of America seeks to give up active support for the spread of democracy in the world, which both Democrats and Republicans adhered to, at least to a large extent, all the US presidents.

However, despite all the important elements of American democracy support policies, such as diplomatic measures to protect democracy in countries where it encounters obstacles; the same US government doesn’t care about certain countries under dictatorship regimes, why?

About Freedom of Thought, everyone has the right to freedom of thought, conscience, and religion; this right includes freedom to change his religion or belief, and freedom, either alone or in community with others and in public or private.

Yet in Eritrea, one of the poorest countries in Africa which acquired its independence from Ethiopia in 1993, after having imposed a civil war on it, systematically has deprived citizens political freedom, freedoms of expression and basic human rights.

Arbitrary arrests, torture, and disappearances of political opponents, putting innocent journalists behind bars, are frequently done by the Eritrean government, which constitute crimes against humanity, yet the US government pretends they don’t know what is happening under the tyrant, corrupt, power-thirsty dictator Isaias Afewerki.

After winning, in 1991, a 30-year war of independence against Ethiopia, at the head of the Popular Front for the Liberation of Eritrea (FPLE), Isaias Aferworki became president in 1993 and has remained so since, without opposition, nor election.

In the absence of independent media, even freedom of religion is threatened.

Described by a former US ambassador as a "provocative imbalance", Afewerki, 69, then founded the country's only political party, the Popular Front for Democracy and Justice, which he leads with an iron fist.

Even before the UN-imposed sanctions in 2009, the Eritrean economy, almost entirely state-controlled, was in tatters. In 2013, Eritrea was 181st out of 187 in the UN human development ranking.

More than 33,000 Eritrean refugees were registered in Ethiopia in 2014, by the United Nations High Commissioner for Refugees (UNHCR), a considerable exodus for this small country of six million inhabitants.

The Democratic US government, on the contrary, doesn't care about the cruelty pangs of dictatorship the leader has unleashed on the innocent population. Barely a thousand Eritrean refugees in Ethiopia were offered resettlement in the United States or Canada, through the UNHCR, in 2014.

The only European countries that often welcome Eritrean refugees are France, Norway, and Switzerland.

Just as I keep asking the reason a country that preaches about Democracy has refused to speak against this tyrant government, the same many governments and humanitarian organizations around the world, bodies supporting and protecting journalists have also raised the same issues.

Below are the simple reasons America, the father of Democracy doesn’t care about Eritreans.

Even though the country has deposits of barite, copper, asbestos, silver, lead, iron ore, potash, zinc, talc, and feldspar, the US government is not interested to engage in business with a dictator.

Eritrea remains one of the world’s most difficult places to do business. Poor governance and lack of commitment to reform hamper economic freedom and drive many Eritreans into the informal sector.

Eritrea is one of the most closed countries in the world, which faces a very difficult economic situation due to chronic droughts, a sharp reduction in Diaspora remittances, autarkic policies and past tensions with Ethiopia.

The country's growth depends largely on raw materials, notably the performance of the Bisha mine. In regards to such conditions, America will not waste time to fight for the release of the innocent journalists languishing in jail.

The economy of Eritrea is heavily penalized by a large public debt, estimated at nearly 131% of GDP in 2018, which places the country in a situation of over-indebtedness. The budget deficit was brought down to around 12.6% of GDP in 2018, compared to 13.8% in 2017 (AfDB).

Public expenditure is burdened by the military budget, which represents 25% of public expenditure. Inflation is stable at around 9%. It remains high due to the insufficient food supply and the financing of part of the public deficit by monetary creation and is accentuated by the lack of foreign exchange.

The government has tried to manage macroeconomic imbalances by controlling and regulating prices, which has resulted in a shortage of foreign exchange and reduced activity in the private sector.

Political instability caused by an armed conflict over controversial borders and accusations of terrorist financing, which had led to support for the Somali group Al-Shabab has significantly weakened Eritrea's economic progress.

In 2009, the United Nations Security Council imposed sanctions on the country arms embargo travel bans, asset freezes, which were lifted in November 2018 to commend the peace efforts, yet the corrupt regime of Isaias Afewerki continues abusing Human Rights and throwing innocent journalists into prison.

If the US Government America says they are interested in Democracy, then the government must encourage and pursue democratic policies in both poor and rich countries in Africa, not Congo because it has rich cobalt or Sierra Leone because it has a diamond.

What does the US government expect in a country which has not held an election since 1993? The world is watching America, therefore, let this hypocrisy come to an end.

Like other US presidents, Trump has criticized many countries, including North Korea for Human Rights violations but not Eritrea because they have no cobalt, the precious element which has led to the deliberate destruction of people and property in Congo with Ebola, the biological weapon, they lied to the world that bats are responsible.

America must, therefore, free the jailed innocent journalists and other political prisoners in Eritrea, that will surely add another significant recognition of their previous impossible achievements.