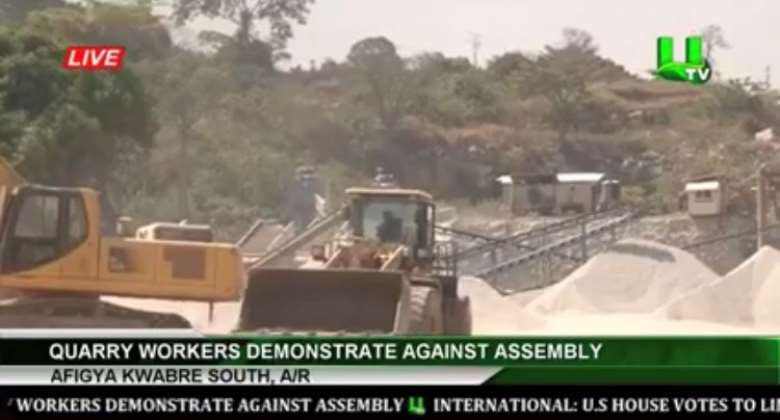 Quarry Drivers' Association of Buoho in the Afigya Kwabre South has made an unassuming intrigue to the Ashanti regional executives of the decision NPP and President Nana Addo to as an issue of direness watch and alert the exercises of the territory, DCE Hon. Adu Poku Christian otherwise known as APC since his pitiless and degenerate act is step by step sending the NPP into an early grave.

As per to these drivers who guarantee to be vigorous supporters of the NPP party, Hon. APC is utilizing his present situation to move his way into egotistical prosperity without thinking about others through corrupt means.

Speaking to the Chairman of the association, he said the supposedly authorized receipt issued by the assembly to the drivers has suddenly been changed to funeral receipt by the DCE which makes it illegal and unrecognized.

He said the DCE's demonstration has caused drivers a ton of damage, and the saddest side of their experience is that the DCE has ordered for the arrest of some drivers who are presently in custody waiting for bail after they challenged against the demonstration.

"You can't give as funereal receipt instead of original receipt since that isn't represented and it continues influencing us.

"We are prepared to help the government informative projects yet you can't utilize deceitful intends to assess us. The people of Nkukua Buoho Stone Quarry association are very angry and irate, Complained NPP has baffled them through APC's acts. We won't pay again until they change the receipt back to the first", he furiously said.

Addressing some distressed drivers on a similar issue they said since APC was screened into power drivers' tranquility in the territory has been demolished everlastingly through his(APC's) evil acts.

"Chairman Wontumi once forewarned him to cease from his devilish acts against drivers yet he wouldn't be tuned in with the main reason that he just needed to contend with graduates and not ignorant drivers", one of the drivers uncovered.

They thusly approach the other top chain of command to act the hero since the DCE's acts are adversely influencing their lives.