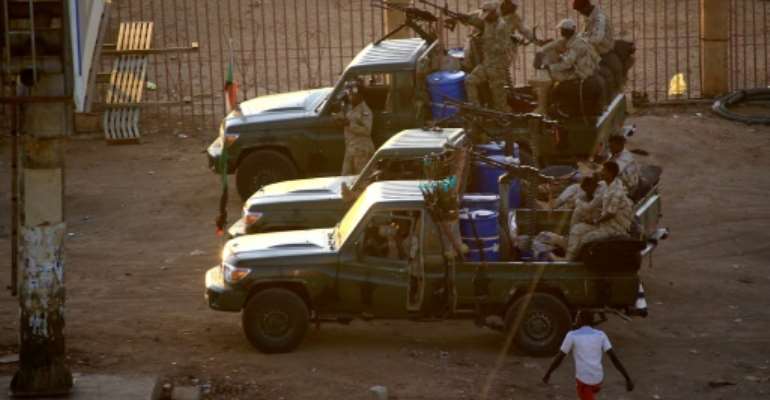 Members of Sudan's intelligence services shoot bullets in the air at the headquarters of the Directorate of General Intelligence Service in the Riyadh district of the capital Khartoum. By ASHRAF SHAZLY (AFP)

Heavy gunfire broke out in Sudan's capital Tuesday as several agents of the long-feared security agency launched a "rebellion" against a restructuring plan, prompting a closure of the international airport.

A teenager was wounded when shots were fired at some bases of the Directorate of General Intelligence Service, formerly known as the National Intelligence and Security Service (NISS), the powerful security arm of longtime president Omar al-Bashir.

NISS agents were at the forefront of a crackdown against protesters during a nationwide anti-Bashir uprising that erupted in December 2018 and finally led to his ouster by the army last April.

Witnesses and an AFP correspondent reported that gunfire broke out at the agency's bases in the capital's Riyadh and Khartoum North areas.

Streets leading to the two bases were cordoned off, causing traffic jams.

The AFP correspondent said several vehicles carrying soldiers and troops from the Rapid Support Forces (RSF) had moved on the bases.

"Troops from operating centres of the intelligence started a rebellion in some parts of the capital," government spokesman Faisal Mohamed Saleh told state television.

He said some troops had came out on the streets, set up barricades and opened fire in the air.

"This happened because those troops rejected the amount of money they got for their retirement," Saleh said, adding negotiations were being held.

Doctors close to the protest movement that led to Bashir's fall said a 15-year-old boy was wounded by gunfire.

A top general accused the former head of the intelligence agency of planning the revolt.

"What happened today is a plan by Salah Ghosh and some other officers," General Mohamed Hamdan Daglo, who heads the RSF said.

Ghosh, a key figure of Bashir's regime, stepped down days after the veteran leader was toppled. His whereabouts are unknown.

The protest movement, Forces of Freedom and Change, urged residents to remain calm.

"We are calling on our people to be calm and not give a chance for those who want to drag our homeland into bloodshed," it said.

NIIS, in a statement, said it was "assessing the situation".

"In the process of restructuring NISS, there are some members who have rejected the financial compensation offered for retirement," it said.

A security source told AFP that the first shooting broke out in the city of Al-Obeid after which gunfire erupted at NISS bases in Khartoum.

Prime Minister Abdalla Hamdok said the situation was under control.

"We want to tell our people that the situation is under control and this will not stop us from achieving the goals of our revolution," he tweeted.

"I assure that Sudanese armed forces and other regular forces have the capacity to handle the situation," he wrote.