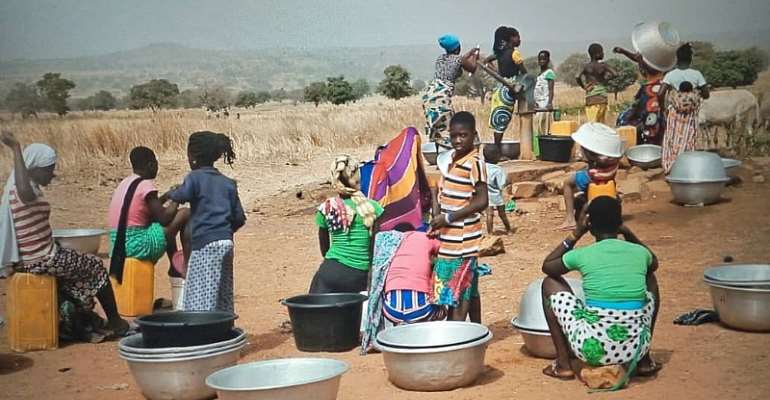 A dam constructed under the One Village, One dam by the government at Zarantinga community in the North East Region has dried up leaving the residents frustrated.

According to them, their hope to engage in dry season farming has been dashed as the dam constructed dried up faster than expected.

This has left most of them idling away.

One man who gave his name as Zarantinga Achiri said, “We just come to sit here under the wooden pavilion because there is no work. Can't you see that people are sleeping at this time of the day? When you go to the bush too, there is nothing there. Nothing to hunt, nothing to trade.”

This is why the news about giving the community a dam was much welcomed by the people. For them, not only would it provide work, but also provide water for animals.

The chief of the community, Naa Nantomah Mahama could not resist the urge to donate the land for the construction of the dam.

“We gladly gave the land to them to construct the dam because we were happy that something good is coming to this community at least. But when they finished it, that is not what we had hoped for. we are not happy about it”, the chief said.

“Government promised to give us a dam and we were happy about that. But this is not the dam we expected. We were happy that our youth can stay back and do dry season farming and stop the migration. We could even do the gardening to cater for our school children. We are begging the government to come back and do it properly,” Majida Daberi, a farmer told Citi News.

Another farmer, Joshua Atanga who is planning to travel to the city to hustle says, five of his animals died due to thirst and wants the government to act swiftly to save the situation.

“Our produce is bad this year. The animals we rear could have assisted but they are dying due to thirst. I have ten sheep, five recently died. And I have used all my harvest to perform funerals. So, if the government is listening, he should let the contractor return and do good work.”

High Rate of Rural-Urban Migration in the Zarantinga Community.

I can count not less than 40 youth that have left the community in the past one week to seek for greener pastures” says the Assemblyman elect for the area, Divine Baba Nibe.

This part of the country experiences an exodus of young people trooping to the city centres to do menial work. Many of them, especially the girls return with pregnancies and babies, community members complained and the construction of the dam could have been a turning point to bettering their situations.

“With the gardening, you can buy your provisions like pomade, clothing and soap so why will I travel? If what I will eat in a day can come from the garden why risk to travel,” said another young man.

Women and children spend so much time queueing at the borehole to draw water day and night in the dry season.

Citi News gathered that the boreholes (two of them) serving nearly 500 households were constructed in the early ’90s and have seen little maintenance since.

School children sometimes miss school to search for water whilst others go to school without bathing.

Water is our main problem here. The dam could support us but it has dried up. We beat each other here every day because if you don't take struggle you won't get to fetch the water. we don't even bath again, we only fight for water that we can drink not bathing and imagine how you will look if you go for many days without bathing. Is it good?” says Deenatu, a housewife.

“We fight often because of the water. Sometimes we insult each other and send ourselves to the chief to settle the matter. Someone can even insult your deceased parents because of water” says Ayisha Sayibu, a woman who has endured so much as a result of the water scarcity in the community.

She further claimed that “we leave our babies at home and go after water at dawn and the cold enters our breasts. So, when they breastfeed, they vomit often. We actually need help.”

Wood harvesting is a household business in communities of the North East Region which intensifies during dry seasons. Many of them wish for dignified livelihoods instead of entering the bush to harvest wood and were pinning their hopes on the constructed dam.

“We don't have an alternative than to enter the forest and harvest the wood. If you don't do that you can't take care of your needs. If the dam was working why will I suffer to the enter the bush and suffer to carry wood to the market just to get money for ingredients and other needs” says Fati Musah who spoke to Citi News on her way from fetching wood from the bush.

Divine Baba Nibe, assemblyman elect for the area, says they have lodged a complaint with the authorities concerning the dam. A delegation was sent earlier to inspect the work.

According to him, the water in the dam dried up just one month after the rains stopped.

Initiatives like these need to be considered the fact that this is an era where climate change inspires most drought periods when designing resource-based projects including the dams.