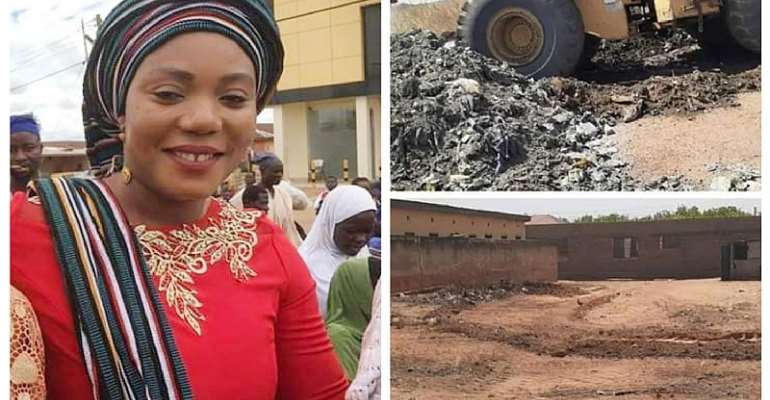 The Parliamentary Candidate of the New Patriotic Party (NPP) in the Sagnarigu Constituency of the Northern Region, Mrs. Felicia Tetteh has been lauded by the Chiefs and people of Parin, a suburb of Sagnarigu for addressing the huge sanitation challenge in the area.

The popular business woman won the hearts of the community members when she mobilized resources to evacuate heaps of garbage that were causing serious discomfort and health threats to the lives of the people.

The Chief of Parin, Naa Abubakari Fuseini and his opinion leaders who showered blessings on Mrs. Tetteh admitted that the evacuation of the garbage had brought a huge relief to the community.

According to him, he and his people had made several appeals to the Member of Parliament for the area, Hon A.B.A Fuseini to assist the community to clear the refuse, but he allegedly turned a deaf ear to their plea.

He pledged to give Mrs. Felicia Tetteh their fullest support in the next general elections.

The Municipal Chief Executive (MCE) for Sagnarigu, Hajia Mariam Iddrisu commended the 2020 Sagnarigu Constituency Parliamentary Aspirant of the NPP for her prioritizing the health of the people.

She said sanitation management had become one of the major challenges facing the assembly as it continues to drain the little money in the coffers of the assembly.

Hajia Iddrisu noted that the intervention by Mrs. Tetteh cannot be underestimated and congratulated her for affecting the lives of the people positively.

She added the intervention by the NPP Candidate falls in line with the vision of the ruling government and the Sagnarigu municipal assembly to make every community of Ghana clean.

“When you have a parliamentary candidate of a political party prioritizing the health, sanitation and wellbeing of the people, it is encouraging and I think the people should entrust their votes to her. Leadership is about championing the development aspirations of the people and if Mrs. Felicia Tetteh as a PC can do this, I think she can do more if she is voted to represent the people of Sagnarigu in parliament. She has proven that women in leadership can do better off than men,” the MCE posited.