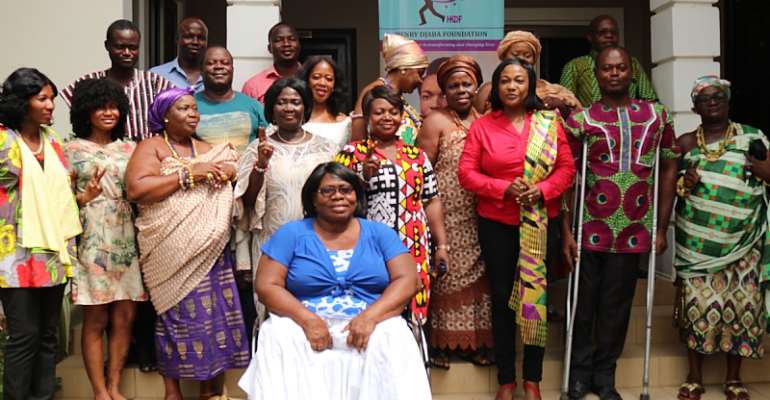 The President of the Republic of Ghana, Nana Addo Dankwa Akufo-Addo has been petitioned to ensure that the mandatory appointment of 30% non-elected assembly members is reserved for only women and persons with disability (PWDs).

A petition issued by the Henry Djaba Memorial Foundation in Accra and signed by some queen mothers, civil society organisations and other interest groups, prayed the President to give 20% of the 30% appointees to women and 10% to the PWDs, since almost all the 70% elected assembly members in the December 17, 2019 District Level and Unit Committee Elections were only men.

Though the low representation of women and PWDs has been attributed to the continuous ridicule, disrespect, and non-recognition of their ability and capacity to take part in decision-making; the stereotyping, the patriarchal society, unequal distribution of power and resources, and cultural and traditional issues, the petitioners believe there is the need for diverse conscious efforts to stem the tide.

A recent directive issued to all the Metropolitan, Municipal and District Assemblies (MMDAs) by the Minister for Local Government and Rural Development, Hajia Alima Mahama did not prioritise the interest of women and PWDs to ensure their fair representation in the assemblies.

Addressing a press conference in Accra to outline the content of the petition, the Executive Director of the Henry Djaba Memorial Foundation, Dr. Otiko Afisah Djaba bemoaned that women’s representation in District Assemblies/Local Government since 1988 had not exceeded 8%.

The situation she indicated is even worse for PWDs, and thus limits their contribution to social, economic and political development of Ghana. The Gender activist said “in all 5,770 electoral areas of the country, women only have a 218 representation while persons with disability have less than 20 representation which calls for ‘serious’ attention by the President and government of the day”.

The petition further demanded the President and the Local Government Ministry to ensure that all the women and persons with disability who contested in the 2019 District Assembly and Unit Committee Elections and did not win are considered for the 30% appointment.

To ensure better representation of women in politics and public decision-making positions in 2020 and beyond, the petitioners insisted on the ruling Government to redeem its promise of passing the Affirmative Action Bill before the end of the first quarter of 2020, (by end of March 2020).

At the Unit Committee level the male nominations received were 34,769 whereas the women were only 3,751.

“The number of men elected into the Metropolitan, Municipal and District Assemblies is so large that there is a need to do something drastic to balance the representation of women and PWDs. This drastic action must be taken in a manner to fulfil Ghana’s Constitutional provisions of ensuring a gender balanced representation and participation in the recruitment and appointment to public offices as per Article 240 (2) (e) of the 1992 Constitution”.

On the other hand, the petition reminded President Akufo-Addo of his status as the Co-Chair of the Sustainable Development Goals (SDGs) of which Goal 5 and 10 promote the rights of women and PWDs to participate in decision-making and social inclusion.

“The SDGs actually have set a target of PARITY for representation of both men and women to represent in decision-making bodies to be achieved by 2030. This will also fulfil Ghana’s commitment to the African Union Gender Agenda of ensuring 50/50 representation of women in decision, of which our President is the AU gender champion. Comparing all the targets and our performance over the years it seems we may not be able to meet the SDG target on gender equality if we focus on only elections. Therefore, we demand that when making appointments into the District Assemblies as by law established, 30% of the Assembly Members should be appointed by the President in Consultation with Traditional Leaders”.