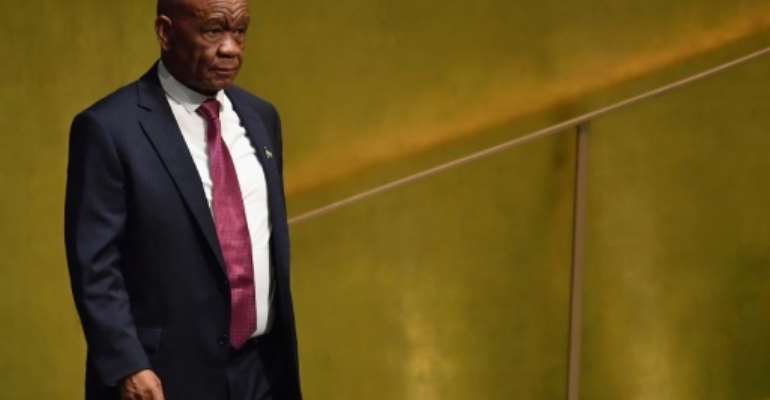 Senior officials in his own party have called on Lesotho Prime Minister Thomas Thabane to step down over the affair. By Angela Weiss (AFP)

A court has issued an arrest warrant for the prime minister's wife after she failed to turn up for questioning over the 2017 murder of his previous wife, police said Saturday.

The announcement came just days after senior officials in the ruling party called for Prime Minister Thomas Thabane to resign, accusing him of obstructing the investigation into the killing.

Lipolelo Thabane was gunned down by unknown assailants on the outskirts of the capital Maseru in June 2017, two days before her husband's inauguration.

In a letter that only became public in court documents this week, Lesotho's police chief Holomo Molibeli asked the prime minister to answer questions regarding his estranged wife's killing.

Thabane subsequently tried to suspend him but went back on his decision this week after Molibeli challenged it in court.

"We got at the State House at around 12 midday (on Friday) but were denied access by the guards at the gate," Mokete told AFP on Saturday.

"When we were allowed entry... she was nowhere to be found." A court subsequently issued a warrant for her arrest, he added.

Attorney general Haae Phoofolo later told police that Maesaiah Thabane would be handed over on Monday.

Phoofolo did not respond to AFP requests for comment.

The prime minister's spokesman Relebohile Moyeye did not respond to calls.

Mokete added that other "prominent people" would be summoned for questioning over the affair.

This is just the latest development in a story that has gripped the tiny poverty-stricken country, which is ringed by South Africa.

At the time his first wife was killed Thomas Thabane, now 80 years old, had been embroiled in bitter divorce proceedings with her.

Molibeli's allegations only became public this week in legal documents the police commissioner filed challenging the move to suspend him. His letter to the prime minister was dated December 23.

Lesotho's ruling party has urged Thabane to resign over the allegations, calling him a "threat to the nation".