Why are the French still backing the strike despite weeks of travel mayhem? 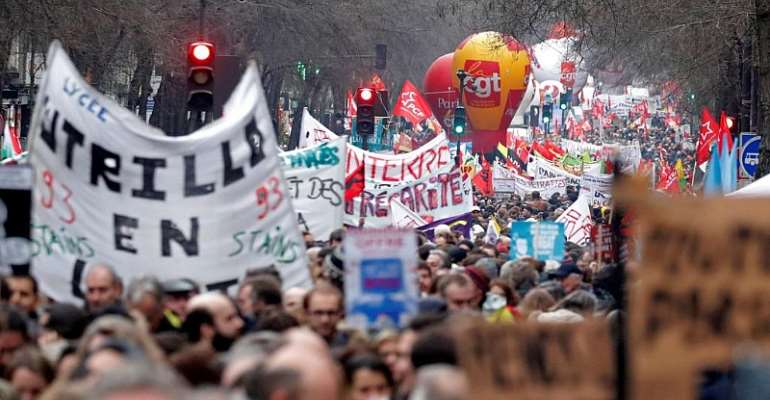 For five weeks, French transport workers have been on strike to oppose the government's proposed pension reform. The strike has forced commuters to walk for hours to get to work and cancelled holiday travel plans. Despite their anger and frustration, over half of French people still support the strike, according to surveys. What is it about the pension reform that has people so worried?

“The political discourse consists in saying that people on strike are protecting their specific schemes,” says economist Anne Eydoux, referring to the 42 special pension 'regimes', most in the public sector, that allow some workers to retire earlier than others with higher benefits. “But the reform will concern everyone, and will reduce pensions for everyone.”

France has a public, pay-as-you-go pension system, funded by contributions from employers and employees, which was put in place as part of the broader social security system after the Second World War. It has many parts, and is complex and confusing, but most people are part of it. So any reform impacts most people in France.

Eydoux is an economist, and member of the Économistes atterrés, a group that says it opposes "neo-liberal" policies, and has been critical of President Emmanuel Macron's pension reform plan. In her criticisms, she shows what many people in France feel about the reform.

Points will not reduce pension inequalities
A central part of the pension reform is a shift to a points-based system. The current system calculates pensions based on the 25 best years of someone's career, or the last six months for public service workers (generally their highest paid).

The reform would introduce points, translating a career into a number of points, based on hours worked. Points are valued at retirement age, but for now the government has been unclear what the value will actually be.

The government says this will be more equitable, taking into account all periods that people have worked.

“The goal is equal pensions for equal careers, with equal pay,” says Eydoux. “That looks like equality. But careers and pay are not equal.”

In Eydoux's analysis, the points will “exactly reflect pay and career inequalities, and this will penalise people with precarious periods in their careers, and especially women.”

Women in France earn 20-25 per cent less than men. At retirement age they currently receive 40 per cent lower pensions than men, because they are more likely to have worked part time, and taken time off work to raise children or care for family members.

The current reform will take this into account, offer percentage increases to women's pensions for children, for example. But Eydoux warns that the fundamental system will be unfair.

“As far as gender equality is concerned, the current system only partly decreases gender inequality, so it's not perfect. But a points-based system will not reduce it at all,” she says.

Spending less, when we should be spending more

Another problem with this reform, according to Eydoux and other critics, is that it aims not only to simplify a complex system, but also to save money. France current spends 13.9 per cent of its GDP on pensions, higher than many European countries.

“This reform… aims to maintain the share of GDP dedicated to elderly people,” says Eydoux, which is the opposite of what should be happening with a growing aging population.

With more people using the same amount of money, pensions will go down, which leads to another concern about the reform: that the government is encouraging people to save for their own retirement, moving away from the pay-as-you-go, social redistributive model to a private investment model.

Sceptical of pension funds
“The reform provides for incentives to use savings, and invest in pension funds,” explains Eydoux.

Indeed, even the European Union has been encouraging private pension investment.

With an aging population and a complex system of pension payouts and retirement ages, it's clear that France could use some kind of reform. But Eydoux, echoing other critics, says that this reform is not the way to go.

“Of course the aging of the population calls for adapting pension rules,” she says. “I think nobody could say that there is no need for a reform.”

The tricky part is finding a reform that all can agree on, and Eydoux is sceptical of what will happen when this reform passes: “If we give the keys to a neoliberal state we do not know what will happen.”

This story first appeared in the Spotlight on France podcast.