6 reasons France is being crippled by strikes 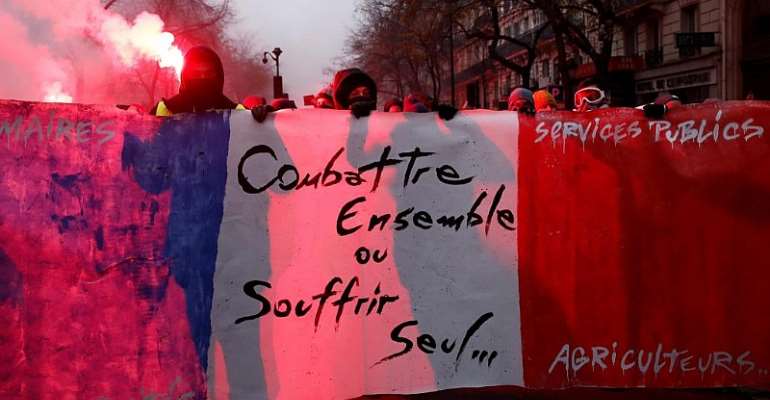 More than a month after France's crippling strikes began, a compromise on pension reform feels far off, with the six points of friction between the government and unions remaining unchanged.

The government is running a tight reforms schedule, with the text to be presented to the Council of Ministers on 24 January, before going before the National Assembly on 17 February – where it will be studied for 15 days.

With several professions joining the strike Thursday ahead of a major demonstration Saturday, this week marks a high point for protesters following the holiday period.

The government has been unable to explain the persistence of the strike movement, despite two years of “consultation” on its reforms. Here are the six major sticking points on which progress has been slow:

1. Ceiling on pensions spending
The pensions budget will be limited to 14 percent of GDP, while the number of pensioners will grow. Unions are equally upset that pensions will be calculated over a person's entire career and not their best 25 years, as under the current system.

2. Absence of an impact study

It's unclear how worker/employer payments will be managed as the transition is made from the 42 existing pension regimes, each with different contribution rates, to a single fund with uniform contributions. Unions are unhappy that no figures have been provided, nor an impact study carried out on how each regime will be affected. The government says figures can't be provided until exact parameters are defined, and that an impact study is “in the process of being finalised” and should be made public on 24 January.

All unions oppose the so-called “pivotal age”, that would allow a person to retire at 62, but would encourage them to work for two more years to get a full pension. Opponents argue it will force people who started work younger to pay more into the pensions fund than those who started work later. The government has refused to remove the pivot age from the text that will be presented on 24 January, but says it is open to discussions to “find solutions that allow the system to be sustainable”.

Unions say the reform is comparable to a football match in which the rules have been changed at half-time. Professions who enjoy early retirement because of the constraints of their jobs, such as transport workers and ballet dancers, have the most to lose – as do civil servants, who unions say could end up with 900 euros a month less in lost premiums.

5. Use of 'jackpot' reserve funds

With the points system pooling all funds together, unions want to know what will happen to 127 billion euros in reserves currently available to the various regimes. The institution representing lawyers says it wants to hold on to a “self-financing fund” of 2 billion euros. The government has said the reserves will remain in the coffers of the professionals concerned and will be used to support the transition to the universal system.

The question of pénibilité involves compensating those whose jobs involve particular hardship. Little progress has been made in this area, though the government on Tuesday promised to present within 15 days a “grand plan” to improve the employment of seniors and to address ways of remunerating people made to endure difficult working conditions.