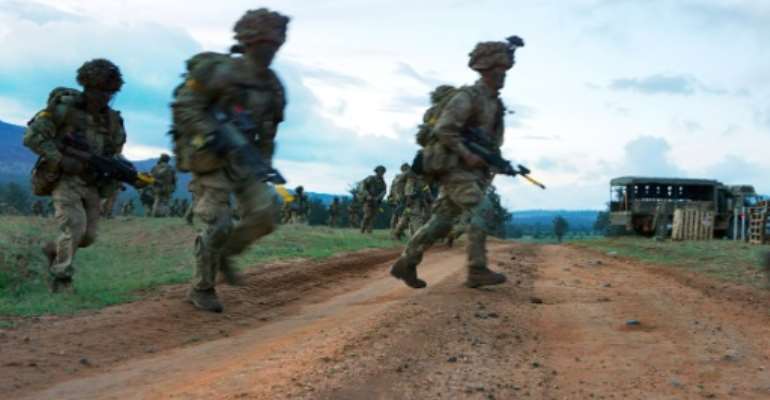 The base was used by the British Army Training Unit in Kenya, known as BATUK. By TONY KARUMBA (AFP)

Kenyan police have arrested three men who tried to force their way into a British military camp in central Kenya, according to an internal police report seen by AFP Monday.

The men were arrested at 5pm on Sunday, just hours after Al-Shabaab Islamists stormed onto a US-Kenyan military base in the coastal Lamu region, near the border with Somalia, killing three Americans.

The report said officers "managed to arrest three terrorist suspects who had earlier in the day tried to force their way into British Army Camp but in vain."

The camp, near the town of Nanyuki 200 kilometres (120 miles) north of Nairobi, is used by the British Army Training Unit Kenya (BATUK) under an agreement with Kenya for training British troops in hot and rugged terrain.

"Kenyan Police are currently investigating suspicious activity near a base used by the British Army for training," the army said in a statement.

"We do not believe there was a direct threat to UK personnel or assets and are liaising with the Kenyan authorities as part of their investigation."

A government source in London told AFP the three young men had turned up at the main gate at the camp, chatting to guards and showing their Kenyan ID cards.

They were reportedly then seen at a back entrance and camp authorities informed local police in line with procedure.

The trio's images had been "captured by CCTV and circulated," the report said. Investigators following up leads "found them near Nanyuki police station where they arrested".

Marcus Ochola, police chief for the Rift Valley Region, said the trio were not armed.

"The three suspects are being interrogated to establish their motive," he said. 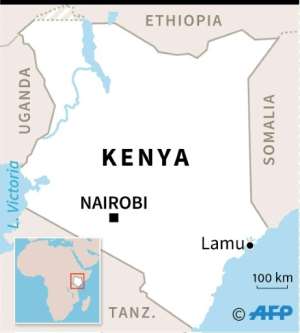 Map of Kenya locating the town of Lamu, where militants attacked a US military base. By AFP (AFP)

Kenyan police are on high alert around the country after Somalia's Al-Shabaab stormed Camp Simba in Lamu, destroying several aircraft and killing three American citizens in their first strike on a hard target in Kenya.

The militants began targeting Kenya after it sent troops into Somalia in 2011 to join an African Union peacekeeping force seeking to combat the militants who have been trying to topple an internationally-backed government in Mogadishu for over a decade.

The Al-Qaeda-linked group has in the past carried out bloody sieges against civilians in Kenya, such as the upmarket Westgate Mall in 2013 and Garissa University in 2015.

The uptick in tensions comes just days before the one-year anniversary of an attack on a Nairobi hotel complex which left 21 people dead.

A separate police report on Monday said a Canadian citizen of Somali origin had been arrested in the suburb of Eastleigh in the capital while taking pictures of a nearby airforce base.

According to Britain's ministry of defence website, BATUK consists of around 100 permanent staff and 280 on "short tour" assignments.

Its job is to provide "demanding training to exercising units preparing to deploy on operations or assume high-readiness tasks."

Under the agreement with Kenya, up to six infantry battalions per year carry out eight-week exercises.