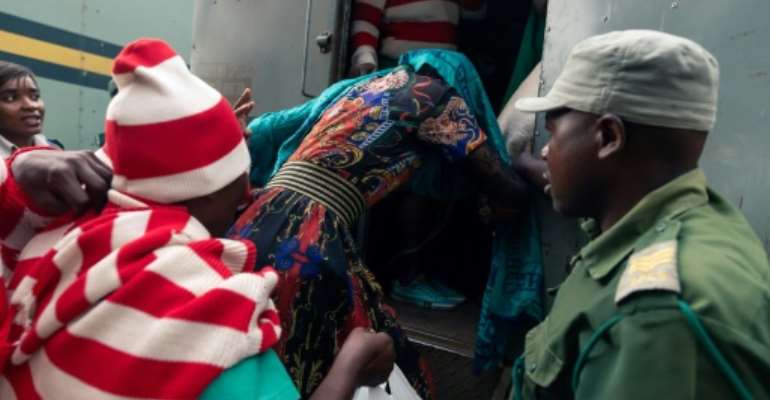 Marry Mubaiwa the wife of Zimbabwe vice-president Constantino Chiwenga covered her head when she was arrested. By Jekesai NJIKIZANA (AFP)

The wife of Zimbabwe's vice president was granted bail on Monday after three weeks in jail on charges of fraud, money-laundering and attempted murder of her husband.

Marry Mubaiwa, 38, who is the wife of Vice President Constantino Chiwenga, 63, was arrested last month on allegations of attempted murder, fraud and contravening the country's exchange control laws by transfering about $1 million abroad.

The High Court in Harare freed her on a 50,000 Zimbabwe dollar (US$2,780) bail and she was ordered to surrender her diplomatic passport.

She also offered title deeds of her father's house as surety.

The businesswoman and former model who was previously married to a national football player, will report to the police twice weekly.

A trial date has not been set yet but she is due back in court on January 14 for a routine pre-trial appearance.

The attempted murder charges arose from a trip last year when she accompanied her husband who was airlifted for medical attention to neighbouring South Africa.

In Pretoria she allegedly took the ailing Chiwenga to a hotel, refusing to take him to hospital until his aides forced their way and took him to a clinic.

Prosecutors alleged that "with intent to cause serious harm," Mubaiwa went to Chiwenga's hospital ward and asked his security aides to leave saying she wanted to have a private conversation with her husband.

Alone with the bedridden Chiwenga, Mubaiwa allegedly removed an intravenous line and a catheter from her husband causing him to bleed profusely, the prosecution said.

Chiwenga, who led the 2017 ouster of long-time ruler Robert Mugabe, went to South Africa to seek emergency medical attention for a constricted oesophagus, before being transferred to a Chinese hospital from where he was discharged late November.

On return home after spending 123 days in the Chinese health care centre, Chiwenga said had he not sought medical help in China, he could have died.

He was welcomed at the airport by China's deputy ambassador to Harare while his wife Marry was absent.

On December 29 he returned to China for what was said to be a review.

Prosecutors also said between 2018 and May last year, Mubaiwa transferred money from her foreign currency account in Zimbabwe to into South African bank accounts under the pretext of paying for goods to be imported from that country.

She allegedly used part of the money to buy a house in a Pretoria plush golf estate and two luxury cars.

VIDEO: Central bank backed digital currencies is the way for...
5 minutes ago