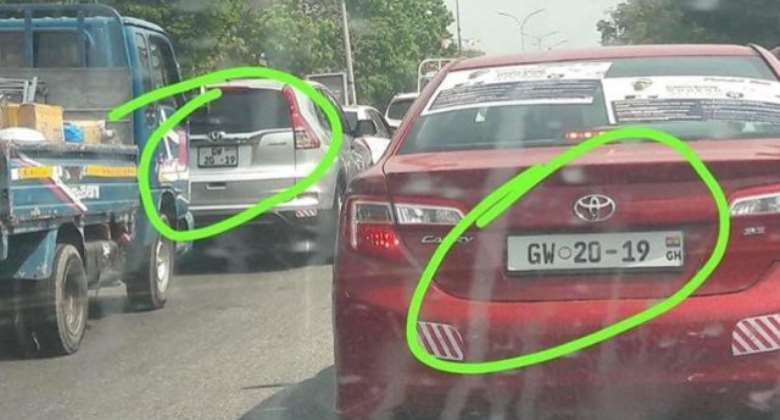 A picture of two different cars with the same registration number, GW 20-19 has surfaced on social media.

This is an aberration in Ghana as vehicles are supposed to have unique numbers.

To ensure this, the DVLA in a recent press statement said it has introduced high security and digitized trade licensing with the aim of improving efficiency and security.

It said the digitization is part of the DVLA’s long-term plan to ensure the entire vehicle registration regime in the country meets acceptable standards.

The statement further said with the new DP licence, power has been given to the citizens and law enforcement officers to verify the validity of DP License at any given time using various devices including a YAM phone via USSD and barcode scanners.

The digitization is further enhanced by the fact that owners of vehicles must present them for examination at vehicle inspection centres with customs documents of the vehicles to Customs Officers for authentication.

The owner then acquires Form A and VRC to complete, affix photograph and sign appropriate places.

The completed forms are returned to the DVLA for processing and a registration number is assigned and the number is issued to the owner.

Therefore the picture of two vehicles with the same registration number comes as a surprise to many. But this is not the first time this has occurred.

The two cars, Nissan Amerra and Nissan Micra, were spotted and stopped during a swoop by the national CEPS taskforce with the same registration number GE 3219-17 embossed on them at Suhum.