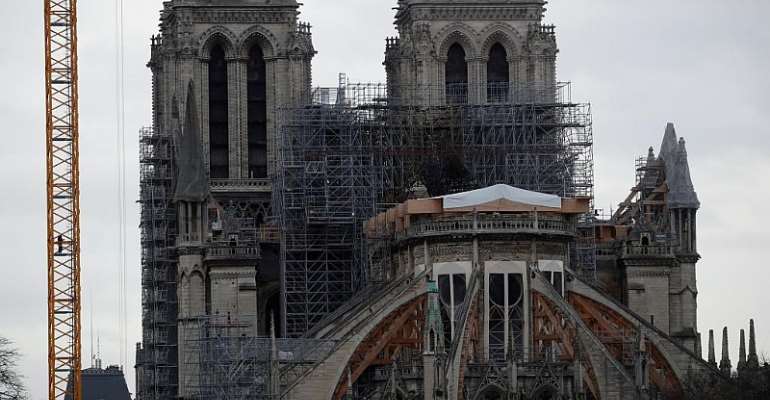 Engineers working to restore Paris' wounded icon have a herculean task on their hands: removing massive scaffolding that had been enveloping part of Notre Dame for repairs and which was damaged by a raging roof fire on 15 April. The move is the most crucial but complicated step in ongoing restoration efforts.

Engineers must extract 10,000 metal pipes forged by April's blaze into a giant web-like structure that must be removed for work to proceed.

However, they need to work slowly so as to avoid any further damage to the cathedral.

The scaffolding was erected for renovation work on the 13th century cathedral before a fire on 15 April tore through Notre-Dame's roof and dramatically toppled its spire.

The damage caused by just a single bar of scaffolding falling could prove irreparable, and the work to remove the structure will take several months.

The top priority is to eliminate any risk to the vaulted ceiling and with it the very integrity of the cathedral.

Lengthy restoration process
For the first time in more than 200 years, the landmark building was unable not host Christmas mass this year.

Stabilizing it has thus become a priority. Nonetheless, the reconstruction process is shaping up to be much more complex than many anticipated with rebuilding only likely to start in 2021.

The spire has proved controversial, with some arguing for it to be replaced by an exact replica, and others -- including French President Emmanuel Macron -- arguing for a "contemporary" touch.

Macron has set a five-year target for the restoration work to be completed.

So far, some 320,000 donations and pledges totalling 922 million euros have been received -- ranging from a single euro offered by an American child to 200 million euros by French billionaire Bernard Arnault.