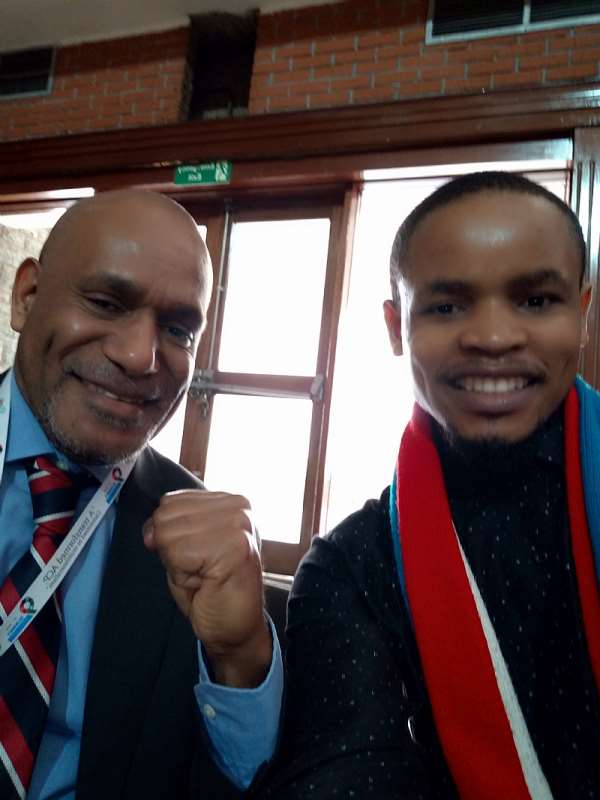 It was a defining moment for Africa -West Papua relations as West Papuan leader attended the 9th African Caribbean and Pacific Group of States summit.

Accompanying him was Vanuatu Ambassador Honorable Mr Adewale, a Vanuatu national of Nigerian descent who upon hearing the meeting was about West Papua , he came to show brotherly support to West Papua.

It was the first-ever state visit for the Independence leader for West Papua in Nairobi and he nostalgically recounted the immense support he received from the government of Senegal.

Kenya was the second African nation to show such kind of solidarity with West Papua but this time support came from an international Pan Africanism organization and United States of Africa project.

Drama At Governors Office
Vanuatu foreign minister Ralph Regenvanu could not make it to the meeting as Daniel Mwambonu's efforts to get the accreditation badge failed as he ended up being frustrated by receptionists at Nairobi governor's office.

Mr. Mwambonu had an appointment with the Pacific Leaders at 1 Pm in the KICC but all the efforts to have accreditation badge fell on deaf ears.

In spite of informing them that he had an important appointment with key Pacific Leaders attending the summit, one of them told him it was not possible to get accreditation to make it into Kenyatta International Conference Center (KICC).

The Global Pan Africanism Network not being invited for the summit in spite of playing a huge role in the reunification of all people of African descent in Africa, Caribbean and Pacific group of states speaks volumes how Kenya views Pan Africanism.

In spite of the hurdles encountered the meeting was held at Nairobi's governor office the same place where Mr Daniel Mwambonu was denied accreditation badge.

His Excellency Mr Benny Wenda narrated how at tender age he was arrested and sentenced for 25 years for raising the morning star flag in West Papua and leading the Struggle against Indonesian colonialism in West Papua.

He managed to escape after he got political asylum in the United Kingdom where he has lived since then.

"I hand over this issue of West Papua to Africans please help us liberate West Papua.

West Papua is an African issue because we are first Africans who left the continent ,thus Indonesians are calling us monkeys from Africa."

Genocide In West Papua
Mr Benny Wenda said Indonesia has killed over 500,000 Papuans since 1963 and many more continue to perish in West Papua.

The situation is getting worse every day and Indonesia does not respect human rights of the Indigenous people in West Papua.

He called upon Pan Africanists and African nations to support decolonisation of West Papua.