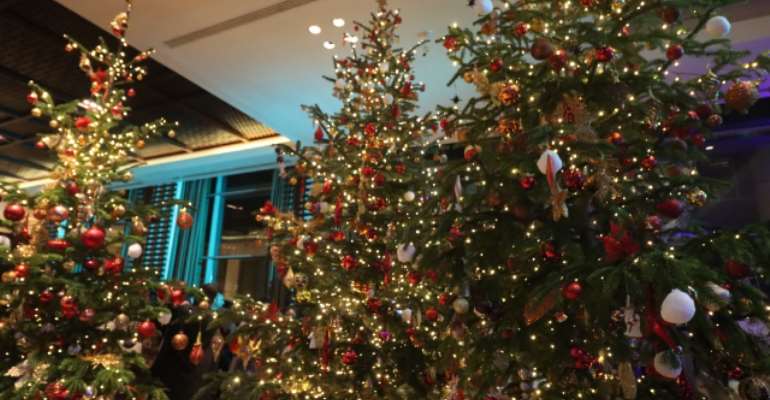 The Ghana National Fire Service (GNFS) has warned that the blinking treaded lights heavily used during Christmas, otherwise referred to as Christmas lights, must be kept away from combustible materials to prevent fire outbreaks.

It explained that when the electric-powered Christmas lights came into direct contact with combustible materials such as curtains and sofas they could catch fire.

The GNFS also advised that the Christmas lights must be turned off periodically to prevent overheating and ignition because many of them were made of inferior materials, making them susceptible to fire outbreaks.

The Deputy Chief Fire Officer (DCFO), Mr Obeng Dankwa Dwamena, was speaking in Accra last Thursday at the climax of a Security and Safety campaign organised by the Graphic Communications Group Limited (GCGL).

Led by the Editorial team of the GCGL, the campaign started in July this year and was aimed at educating Ghanaians on safety and security measures to assist the state in its campaign to make the public security conscious.

Under the project, the various brands of the GCGL published articles, news and tips on topics such as “Weather warnings - Essential for personal safety”, “Consider emergencies while fixing burglar proofs” and “Accra traders turn electrical transformers into warehouses”.

Ban still in force
Mr Dwamena reminded the public of the ban on the use of firecrackers and related explosives which had contributed to fire outbreaks during the Yuletide in the past.

He also urged the public to adhere to safety practices wherever they found themselves.

“We must adhere to safety practices in our offices, homes and industry. All precautions that need to be observed in the use of electrical gadgets must be fully observed,” he stated.

Mr Dwamena further stated that practices such as overloading of sockets, leaving appliances unattended to, prolonged use of air conditioners and the use of faulty appliances needed to be avoided at homes and offices.

Bushfires
He urged farmers and hunters to desist from setting fire to bushes in their quest to clear their farmlands or hunt for game, especially during this time of the year.

He also advised the public to respect the annual ban on hunting for game between August and December.

DCFO Mr Dwamena also stated that the GNFS frowned on people cooking and selling at lorry stations, as well as in and around filling stations, since that threatened public safety.

He, therefore, called on driver unions, station masters and owners of filling stations to adopt measures to mitigate the above-mentioned activities in order to safeguard the public and their businesses.

Safety tips
Touching on some safety tips at home, Mr Dwamena explained that sources of heat used for purposes of cooking must be well attended to and properly extinguished after use.

“Operators of places of entertainment, including bars, pubs, restaurants and nightclubs must ensure that their customers who smoke are guided on proper disposal of the butts,” he advised.

Mr Dwamena said storage of flammable substances such as liquefied petroleum gas (LPG), petrol and oil paint in residences should be discouraged.

“Unauthorised electrical connections must be discouraged, keep matches away from the reach of children, don’t drop cigarette butts carelessly and don’t smoke in bed.

“Do not run your wires under carpets, don’t store fuel at home, switch off engines at the fuel station, install fire extinguishers at home and workplaces, keep lit candles in ash trays, do not dispose of insecticide cans in fire and blow out all candles when you leave the room or go to bed,” DCFO Mr Dwamena said.