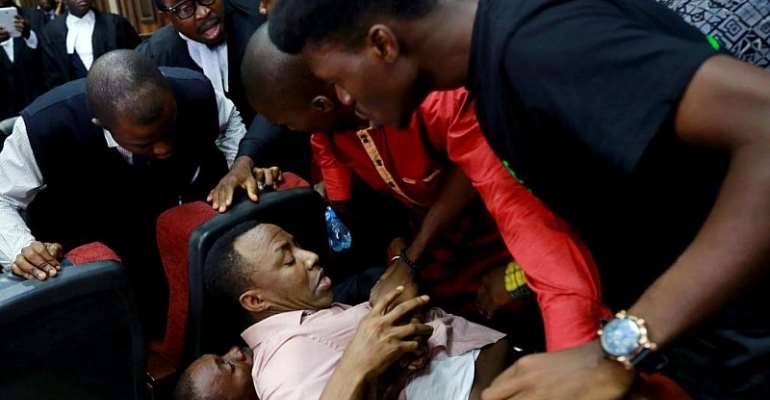 Sowore, who is the publisher of the US-based Sahara Reporters and flagbearer of the African Action Congress in the 2019 Presidential elections, was dragged to the Abuja-based court for staging nationwide protests against the government of President Muhammadu Buhari.

The pro-democracy activist was taken back to the same Department of State Security Services in Abuja where he was held for 120 days before being charged.

As Friday's court invasion sparked a nationwide outrage, the presidency issued a statement apparently aimed at shielding Buhari from the scandal.

“The DSS didn't need to consult him before dealing with any matter it considered as a threat to national security”, wrote presidential spokesman Garba Shehu.

Meanwhile, Nigeria's House of Representatives on Tuesday mandated its relevant committees to investigate the action of the spy agency at the premises of a Federal High Court in Abuja.

The invasion of the courtroom by DSS operatives can be seen as one arm of government attempting to overpower another, which will spell doom for the country's democracy, warned the House Minority Leader, Ndudi Elumelu, during Tuesday's plenary.

But democracy activists claim that the DSS operation was just the latest signal of how deep Nigeria has slipped into an abyss of totalitarian rule.

The extent of which he is Balkanizing the courts shows the depth to which he has sunk the democratic process, Ayo Adebanjo, who served a spokesman for the National Democratic Coalition which led the campaign that ended decades-long military rule in Nigeria in 1994, said.

“Sani Abacha was the worse military dictator we had, but he never dared desecrate the courts”, said the 91-year-old Adebanjo.

According to the elderly statesman, this is not the first time Buhari's government has refused to execute court orders.

He cites the case of former National Security Adviser, Sambo Dasuki, and Nigerian Shia leader Ibraheem El-Zakzaky who remain under DSS custody despite having been set free by Nigerian courts.

Ayo Adebanjo told RFI that the court invasion it is proof that Buhari hasn't shed the garments of the dictator he wore during his time as junta leader.

The US State Department stated on Saturday it was deeply concerned that Omoyele Sowore had been re-detained in Nigeria, after the Federal High Court ordered he be released on bail.

"Respect for rule of law, judicial independence, political and media freedom, and due process are key tenets of democracy”, the statement noted.

Avoid greed, dishonesty and hypocrisy in galamsey fight – As...
10 minutes ago