Why Killings And Attacks Against Ebola Health Workers In Congo? 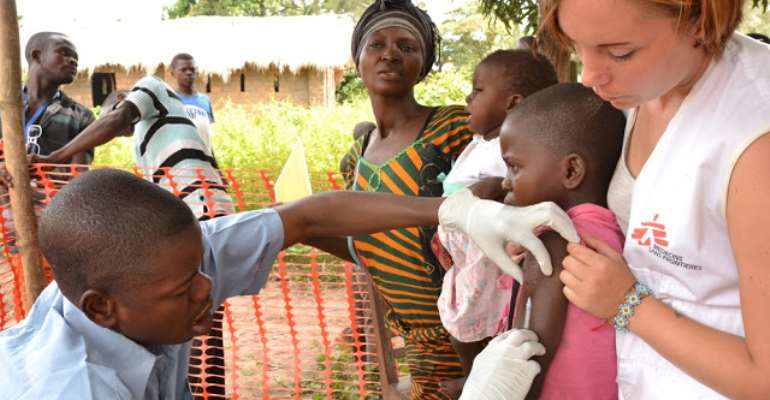 The media, not even the BBC or CNN that boasts of qualified health journalists, would tell the general public the reason behind the population revolt, killings, attacks on health workers and the immediate wanting to expel the UN mission from the Democratic Republic of Congo.

Since the beginning of this year, many health workers working round the clock to save the lives of Ebola victims have been subjected to a series of attacks.

Last Wednesday, the international aid group Médecins Sans Frontières (MSF) had to pull its foreign staff out of DR Congo’s Ebola-hit east after armed rebels killed four health workers killed in a single night and the armed group tried to break into one of its medical facilities.

The reality is, in life if persuasion fails, the force will be applied. It is not every time the US government will commit a medical crime in Africa and let people believe that monkeys or poverty is responsible for Aids, while bats and bushmeat are responsible for Ebola when it's no longer a secret that both diseases were laboratory engineered as biological weapons.

The rebels and the Congolese getting to know the truth are now interested in revenge. They want the disease to spread just like Aids for the US government to have a taste of its own medicine. Frankly speaking, those health workers are there not because of the Congolese but to avoid the spread of the disease to Europe and the United States of America.

Whatever article I write about Ebola and published in Ghana, the US Embassy in Ghana, quickly files it and the article sent to America. Therefore, with confidence, I write without looking back because you can only kill a journalist but you can't kill the truth, I am, therefore, ready to die or go where ever they want to take me if they are not responsible for both Aids and Ebola in Africa.

Why did the US government provide Ebola Detectors to all the 50 States in America? Are they now afraid that the disease will spread? And why has the European Commission announced a €50 million pledge to fight Ebola in Africa? The answer is as simple as ABC, they are scared of the spread of the disease they deliberately inflicted on innocent people in Africa.

Health officials warned that the rise in violence in the central African nation is hampering the Ebola response, stressing that the retreating virus is likely to resurge. They should rather tell the world the truth of the reason the rebels and the Congolese are behaving in this way when Ebola is killing the people.

If rebels are fighting why are they interested to enter into one of its medical facilities? They just want sweet revenge but this is something the media wouldn't like to publish. CNN will go to Ghana and investigate child labour, then to Libya to investigate Africans in slavery but they will never investigate the origins of Aids and Ebola.

If I am the Ghanaian government, I will never accept the presence of CNN in Ghana, just like how other countries wouldn't like to see the face of any CNN journalist. I will not finish this article without adding this, the owner of CNN, Ted Turner, born Robert Edward Turner, like Bill Gates, also believes in global depopulation to save the planet.

You must, therefore, understand the reason CNN wouldn't like to investigate the origins of Aids and Ebola to keep their job as well as not exposing Ted Turner.

Read more from our health blog 'Secrets Of Aids And Ebola Facts Journal,' because the US government has requested the giant search engine company, Google, to hide our blog from search engines, we have, therefore, lost readers from over 10,000 reads per day to only 100.

According to Shakespeare, "The evil that men do lives after them," but I strongly believe those responsible for Ebola in Africa will pay for their crimes, including the next generation. Some times, we don't need to be worried too much when catastrophe strikes in places such as the United States of America because the US government is pure evil.