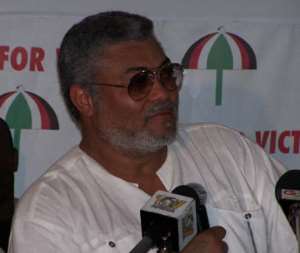 ...refuses to use VVIP lounge Accra - Ghana's outspoken former president Jerry Rawlings has turned down the government's offer to restore protocol courtesies that were taken away in 2002 as the standoff between the two sides continued, reports said Sunday.

Rawlings, who seized power during two military regimes in 1979 and between 1982 and 1992, had the special privileges withdrawn for what the government termed provocation against the current administration.

Foreign Minister Nana Akufo-Addo announced the restoration of the courtesies last Tuesday, saying it was 'not only to reinforce the dignity and status of a former president but also to improve the political atmosphere in the country.'

The foreign minister expressed the hope that 'the circumstances that compelled government to act initially would not be repeated so that the institutions of our state can operate on a normal basis.'

However, when Rawlings returned from Libya on Saturday night to the welcome of a large crowd of his supporters, he did not pass through the VVIP lounge at the Kotoka International Airport in Accra.

'Nothing has changed,' Victor Smith, special assistant to Rawlings, said on Sunday.

He repeated that the withdrawal of the courtesies was unconstitutional and if the privileges were being restored because Rawlings had not made any public statements over the past few months, it is because he has not found it necessary to talk.