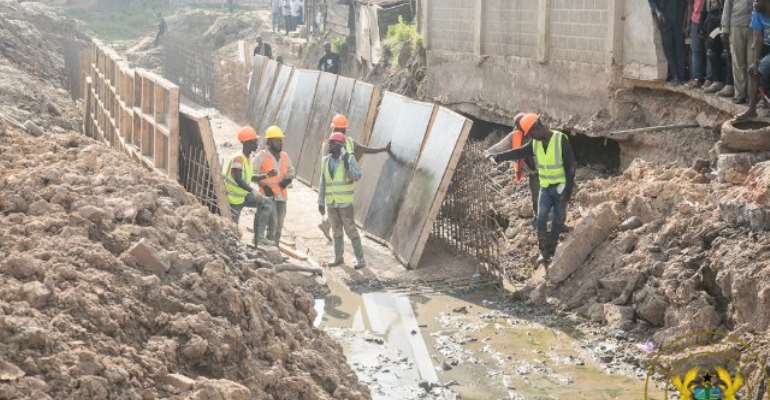 The Odawnaa area is highly flood-prone, and with surrounding communities flooding when it least rains.

The Minister for Works and Housing, Samuel Atta Akyea, has assured that the Odawna-Sahara drainage project will be completed in February next year.

The construction work on the Odawnaa Area Drain, which commenced in December 2017, involves the construction of reinforced concrete rectangular covered drain measuring 3.5mx 2.0mx520m length, including side drains.

Taking the President, Nana Akufo-Addo, on a tour of the facility, the Minister for Works and Housing indicated that, currently, the drainage construction works are almost 100% complete and the benefits have, so far, been phenomenal.

“The construction of the drain has tremendously transformed the area, mitigated the perennial flooding, and brought great relief to the residents of the area who used to evacuate their homes as soon as rain clouds began to gather,” he added.

The Minister assured the President further that the drain will be covered to prevent the dumping of refuse into it.

Under the flood Relief works, a contract was awarded Messrs. Chum Turk Ventures in April 2019 for the construction of the drain around the Odawnaa ‘Fitters’ area. The contract sum was GH¢2,499,715.90, and it involves the reconstruction of the existing block to intercept and convey stormwater flows from the Fitters’ area into the Odaw Drain.

Commencement of work on the project delayed due to persistent rainfall, which usually resulted in the flooding of the area, including the project site.

However, with rains subsiding, Atta Akyea stated that work has commenced and about 100m of the drain has so far been constructed.

The Odawnaa area is highly flood-prone, and with surrounding communities flooding when it least rains. It will be recalled that the flooding of June3, 2015, resulted in the loss of lives and properties, with the attendant explosion of the GOIL Filling Station.

That is government, through the Ministry of Local Government and Rural Development, under the Infrastructure Development Fund, awarded the Contract for infrastructure upgrade for the Odawnaa Market Area to Messrs. Comet Construction Company Limited in 2017.

The Odawnaa Market Area Drain was unlined and used as a garbage receptacle and place of convenience.