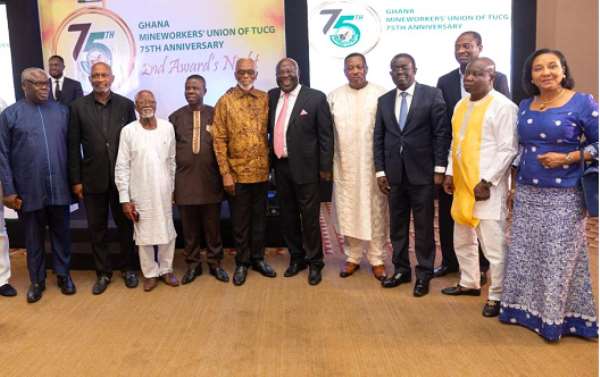 The Ghana Mine Workers' Union (GMWU), as part of their 75th anniversary, has honoured four more dignitaries for the significant roles they played in shaping the mining sector of Ghana.

The award winners included Sir Sam Jonah, former Chief Executive Officer of Ashanti Goldfields Company Limited, who set the pace for a fresh mining environment where business and people issues were equally prioritised, and Prof. Akilakpa Sawyer, former Vice Chancellor, University of Ghana Legon, who exhibited a distinctive repository of knowledge and wisdom during the preparation of the modern mining laws of Ghana.

Others were Mr. Sam Poku, former Executive Director, Ghana Chamber of Mines, who played a critical role in removing the hitherto adversarial union/management relationship within the mining industry, and Mr. Kofi Ansah, Founding Chief Executive of Minerals Commission, whose pioneering role in shaping the mining industry laid a strong foundation for the growth and development of the Minerals Commission.

The General Secretary of GMWU, Prince William Ankrah, who welcomed the management, committee and entire membership of the union to the awards ceremony, said four award winners in their various organisations left a lasting legacy on the mining landscape through their work.

“To commemorate this diamond jubilee, we have thought it wise to recognise and honour distinguished statesmen and industry giants whose inestimable contributions have shaped the mining sector of Ghana,” he said.

The Chief Director, Ministry of Lands & Natural Resources, Prof. Patrick Agbesinyale, commended the management committee and the entire membership of the GMWU who have deemed it appropriate to recognise the doyens of the industry.

He said government appreciates the conducive environment created by the harmony among the stakeholders and would work with the union as it has done in the past to maintain the mutual beneficial relationship.

Sir Sam Jonah, who spoke after the awards, said he was humbled to be part of a group selected by the GMWU to be awarded.

He, therefore, expressed his appreciation on behalf of the award winners for the recognition.